Review: Confessions of An Almost Girlfriend by Louise Rozzet 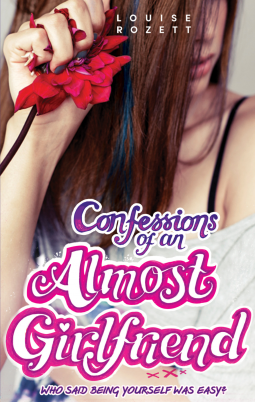 Louise Rozett has done it again. She seemingly makes a typical high school girl "oh-no-cheerleaders-are-bullying-me-waaaaaaa" book, but when I actually read this after the first book of the Confessions Series, I decided that it was awesome.

Confessions Of An Almost Girlfriend (Confessions #2) is about Rose Zarelli. She has big plans for sophomore year — everything is going to be different. This year, she’s going to be the talented singer with the killer voice, the fabulous girl with the fashionista best friend, the brainiac who refuses to let Jamie Forta jerk her around...

...but if she’s not careful, she’s also going to be the sister who misses the signals, the daughter who can only think about her own pain, the “good girl” who finds herself in mid-scandal again (because no good deed goes unpunished) and possibly worst of all...the almost-girlfriend.

When all else fails, stop looking for love and go find yourself.


Rose is a girl who's father died eighteen months ago, in love with a guy who used to date one of the meanest, most insane cheerleaders ever, and her best friend is now an up-and-coming fashion blogger. What's not to like?

Now, you could not make sense of this story without reading Confessions Of An Angry Girl (Confessions #1) first. In this second installment, we readers start to really understand Regina more. Why she refuses to let go of Jamie, and why Jamie is so protective of her in the first place. A new character is also introduced, Regina's little brother Conrad.

First off, Conrad is gay. He's also kind of a dick to Rose, though she totally doesn't deserve it. This is the first time I've actually hated a gay character in a story. But Louise really knows how to make a reader love or hate a character.

I also love the ending. No, Rose didn't end up with Jamie. But you know why? She realized that she was her own person, and this life was her own. So she gave up on Jamie, and discovered who she really was. With the help of Angelo and Vicky. Never forget Angelo and Vicky.

All in all, I rate this book a 5 out of 5 because it was too great for words.

Review based on an ARC from Netgalley
Expected publication: June 18th 2013 by Harlequin

Posted by guest blogger Sophia
Posted by multitaskingmomma at 5:21 AM

Email ThisBlogThis!Share to TwitterShare to FacebookShare to Pinterest
Labels: YA