Nameless by Joe Conlan gets you  from the first page. It can trap you in the world of a psycho so twisted and evil, it is hard to escape the mind of the serial killer. The detailed and intimate relationship that develops between the words of the author and his readers is intense.

The Blurb: (You can read an excerpt from Nameless right after this review!)

Chilling and taut, NAMELESS introduces a fresh and exciting twist on the deadly game of cat and mouse. By virtue of one impulsive and deeply human, but all too grave mistake, a good and decent man finds himself pitted against the embodiment of evil and threatened with losing everything and everyone he loves and values; including the pristine reputation he has endeavored all his adult life to establish. FBI Special Agent in Charge Daniel Falcone unwittingly steps onto course for a head-on collision with a frighteningly brilliant psychotic serial killer, whose harrowing childhood abuse and neglect left him devoid of humanity and salivating for revenge. Framed for a brutal murder on a commercial cruise ship, and fighting for the right to raise his sons and clear his name, Falcone races against the clock and struggles to keep his eyes on the prize, even while his profound guilt and self-loathing threaten to destroy him faster than his maniacal adversary.

I have to confess that after reading the first chapter I shut off my Kindle and set it aside, looking at it from a distance. I was scared. Plain and simple, I was terrified. I did not get to pick it up until my curiosity drove me to open the book once more and just made sure I was sitting with my kids playing with their PC games while I continued to read it. I have lost count of the times I had to shut my own mouth from screaming.

I have never, ever! reacted this way to a thriller before.

Joe Conlan is a master of the descriptive word. He has a strange talent in making and describing such a graphic novel into something beautiful. It is picturesque yet crisp, leaving just enough to get a clear view into the movie playing in his head.  The story line is well worked and it was a surprise to find out this is his debut!

On the first chapter, I screamed the book shut in fright. By the second chapter, the readers may already have a list of several suspects of who might have framed Daniel Falcone, apart from that very overt hint of a name that jumps out from nowhere.

The only thing that bothers me is how the serial killer developed from an illiterate abused child to an expert who knows how to read, write, and do excellent research. Ten years of educating yourself would not be enough if you had to start from scratch. Plus, such abuse would tend to make a person underdeveloped both mentally and physically. Yet, Nameless is exceptionally intelligent and strong. Hmmm...

Now for my criticisms....

Mind you, these do not, in any way, reflect on the writing ability of the author Joe Conlan, but these do need to be mentioned. Take note that I am reviewing from an ARC copy and if these have been corrected in the final editing, then please disregard.

*1. I feel the book is well-written but sloppily edited.  I hope corrections can be made, as it's too good a story to flop because of a few inconsistencies and typos.

A. The author describes how Glamorosa Champagne was killed in the beginning yet when the body was found, the placement of the cut off penis went from the ass to the mouth. Although the mouth placement would be more believable. Was this a typo?

B. Nameless disguised himself with black hair and a full beard to eavesdrop on Daniel and Annie yet straight from the scene morphs into a blond god to pick up a gay john to murder.

C. The cell phone was off in a safe yet the message Leland sent was marked "received?" May be received but NOT opened?

*3. Finally,  I can't figure out how no one asked about the surveillance tapes in the ship and linked the connection to the last murder on board when the cameras went out at a very opportune time.

***All these typos and inconsistencies were corrected in the final edition of Nameless. The ARC copy this review was based on was an older version and had, to quote the author: "Many typos and the blond to black hair thing was corrected afterwards (part of the learning process). "

Joe Conlan has the ability to get his readers' heartbeats on a constant suspense-filled staccato  beat. So here, I have to warn readers: BEWARE! If you do not want to get ensnared in a beautifully described world of good vs. evil, if you don't want to risk your getting out of breath from the endless thrill, action and suspense that is the whole book, then this is not for you. 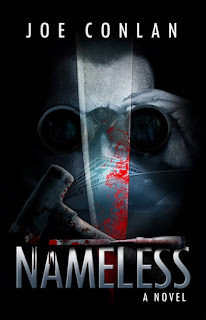 Review based on an ARC sent by Netgalley.

Written in collaboration with Ramona
View all my reviews

Posted by multitaskingmomma at 10:15 PM