Guest Blog from "Hollywood Lies" Author NK Smith: Get A Chance To Win A Free Book!

Today we welcome and congratulate author NK Smith on her blog tour for Hollywood Lies.

Based in the American Midwest, N.K. Smith is a Technical Writer for a Fortune 100 company. The author of the Old Wounds Series, she is a mother of two who finds the time to write very early in the morning when the rest of the world is still fast asleep.

An avid lover of history, art, music, books, and people, she is interested in telling stories that speak to the human condition.

We thank Ms. Smith for graciously donating a FREE ebook copy of her book: Hollywood Lies.

In a world where make believe is a multibillion dollar industry, it’s hard to know where the fantasy ends and real life begins. When Collette Stroud, an influential Hollywood actor and director, takes a chance on two young actors for her romantic teen movie, three lives converge in a complicated web of publicity, passion, lust, and lies. 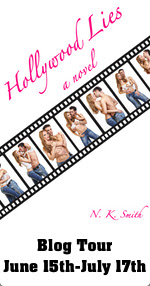 The web is cast when Stroud, a woman with a few skeletons in her closet, hires two young artists in her low-budget film. She handpicks Liliana Addison and Devon Maddox to be Hollywood’s next big stars. Former child star Liliana has had limited success with her previous roles but hopes to take the world by storm under Collette’s tutelage. While Devon is an out of work actor, he never stops dreaming about making it big. The director’s interest in him assures Devon his dreams are about to become reality.

Sparks between Collette and Devon set their lives ablaze, but the studio has other plans. Executives concoct a fictitious romance in order to drive box office sales and launch careers between Devon and Liliana. When the studio offers to make the young actors into bona fide stars, will the price be too high to pay, or will the deal be too sweet to pass up?

Can the trio handle the pressure of a hidden romance coupled with a phony public relationship? Will love be enough to conquer the promise of fame, fortune, and a lasting legacy, or will it be an easy sacrifice?

All three will tread the thin line of Hollywood Lies and genuine passion on the most important red carpet walk of their lives.


Why It’s Cool to Be a Book Nerd/Geek
By N.K. Smith


From Merriam-Webster.com:
Definition of NERD
: an unstylish, unattractive, or socially inept person; especially : one slavishly devoted to intellectual or academic pursuits

1
: a carnival performer often billed as a wild man whose act usually includes biting the head off a live chicken or snake

2
: a person often of an intellectual bent who is disliked

3
: an enthusiast or expert especially in a technological field or activity


So let’s be honest: The above definitions are kind of bullshit, no? Okay, so book nerds and geeks are usually slaves to their book addiction. They are enthusiastic about reading and recommending great fiction, and some would call them experts. But unstylish, unattractive, socially inept, and disliked?

I don’t think so.  Today is the best time to be a nerd or a geek centered around any “field or activity.” Didn’t the dictionaries get the memo? Nerds and Geeks are cool (and in a lot of cases, we’re the ones behind the scenes making things work, making things pretty, making the world modern).

But let’s talk about book nerds and geeks specifically.  I’m not sure about anyone else, but I’ve seen some decidedly attractive, stylish, and socially charismatic people reading books and talking about them. And, just to be clear, I think one very stylish accessory for every hip and happening person is a book (physical, e-reader, smart phone, whatever). You know what’s attractive? Intelligence. The ability to take symbols written on a page or a screen and interpret them well enough not just to make sense of them, but to draw meaning from them as well.

And just who is disliked? With 17 million members on GoodReads alone, I’m thinking book nerds and geeks aren’t disliked. We’re popular.  Take a look at the explosion of book blogs? A Google search rendered over 2 million blogs dedicated to books, the reading of, the discussion on, the creation of, the love of… There’s no way a follower of a medium with this many blogs and that many members (on just one social site) can be described as disliked or referred to as unpopular..

Know what else? We’ve got the inside scoop before anyone else. Want proof? How many people are just dying to know what happens to Robb Stark and Daenerys Targaryen? Well, guess who already know? That’s right, people who read books (specifically George RR Martin’s Song of Fire and Ice series).  Even True Blood is an adaptation of a book series (The Sourthern Vampire Mysteries series by Charlaine Harris), so it stands to reason those fans of the show who have also read the books may have some character and plot insights the average viewer does not have.

For a chance to win this book, leave a comment below and your email address. The winner will be announced in tomorrow's post.

Posted by multitaskingmomma at 6:31 PM

Email ThisBlogThis!Share to TwitterShare to FacebookShare to Pinterest
Labels: GenFic