ARC Review: The Enemy Inside by Vanessa Skye 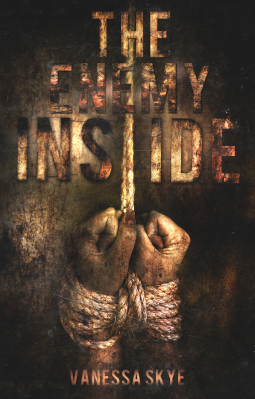 Chicago Detective Alicia Raymond, aka Berg, hides her depression and a brutal past with dangerous, anonymous sex and an obsessive desire to track down killers. Bringing murderers to justice is the only thing she has in her life worth living for.

Her partner, Detective Inspector Jay O’Loughlin, has a few secrets of his own. He knows Berg isn’t as perfect as her faultless veneer, but as his intense attraction to her grows, can he overlook it?

Captain Louise Leigh assigns them to investigate the gruesome murder of a trucker and repeat sex offender. But before they can get a lead on the killing, another trucker’s body is found on the highway. Soon the bodies pile up, and it’s a race against time to find the killer before their Chief, Consiglio, uses them as scapegoats to fulfill his political aspirations.

When Berg’s DNA is found on one victim, her career looks to be over. In the course of clearing her name, she and Jay grow even closer, so when her sordid sex life is exposed, their precarious relationship comes under fire. With nothing to lose, Jay and Berg forge ahead and defy direct orders to continue working on the cases, until Jay disappears.

Desperate to find him, Berg stops at nothing to unearth what links the murders together, eventually uncovering a sadistic vigilante exacting revenge for a thirty-year-old gang rape. The sheer viciousness of the rape makes Berg question her place in a justice system that increasingly allows the guilty to go unpunished.

Berg fears for Jay’s life, but her demons are overwhelming. As events spiral out of control, Berg is forced towards a final confrontation with the killer where she will face the ultimate test: surrender to the evil inside her or finally confront the past she would rather bury.

It's not often that I come across a book (or movie) that I can't guess the ending of or actions the characters would choose to make. And I am very happy that The Enemy Inside is that kind of a story.

Vanessa Skye has come up with an extremely complex plot, one that keeps you guessing until almost the end. It's great that the characters don't have the obvious reactions that are the usual fodder of the predictable - and extremely boring - crime books. This very complexity is what makes them come alive and root for both Berg and Jay (and also want to kick him where the sun don't shine at times).

I understand why Berg acts the way she does, although I must say I honestly thought she was beating someone up at first. That action would have been probable as well, as you have a hint of her having gone through some sort of traumatic experience. Ms Skye does a fantastic job of making you care for Berg and want her to beat both the vigilante and that little voice which continuously taunts her.

Jay first seems to be "sex on legs" (reminded me of Pep Streebeck in the 1987 Dragnet movie) and then develops into a more complex person you feel for, although he can be extremely irritating at times - just like a true male! He's one I could happily have a love/hate relationship with.

All in all, this is a book I couldn't put down easily, and when I was forced to, kept replaying and forming new possibilities in my mind. I just saw that the next instalment will be out soon and I can't wait to read it!

I received this ARC in exchange for an honest review.
Posted by Ramona at 9:27 PM