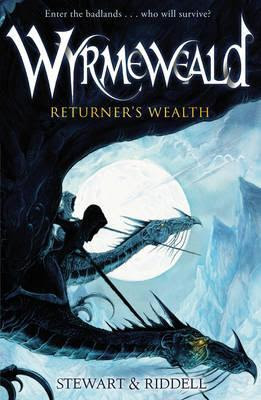 Fantasy YA
1 out of 5 Stars


Seventeen-year-old Micah, enters the wyrmeweald full of hope to return home having made his fortune. But this is a land where wyrmes, fabulous dragon-like beasts, roam wild and reign supreme. In Wyrmeweald man is both hunter and hunted - and Micah may never return alive, let alone a hero... He soon finds a chance to prove his worth when he meets with Eli, a veteran tracker, and together they defend a rare whitewyrme egg and its precious hatchling. But the fledgling wyrme has its own guardian in the shape of the beautiful, brave and dangerous Thrace. Thrace and Micah should never mix - but the magnetism between them is strong. Together they join forces on a mission to rescue the hatchling - and seek vengenace for lost loved-ones.

The first ever fantasy series I read in elementary was the Dragon Riders of Pern series written by award winning fantasy/sci-fi writer, Anne McCaffrey. Although Ms. McCaffrey is no longer with us, her son picked up her writer's reins and continued the development of the world of Pern. This is a much beloved series by millions the world over, including myself. These series of books (which I still reread from time to time) were what drove me to be a lover of dragon stories in any shape or form.

So imagine my fascination when I read the blurb for Wyrmeweald: Returner's Wealth (Wyrmeweald #1) by Paul Stewart and Chris Riddell. I thought it too much a coincidence that a such a Pernese-type word would find its way outside that world.  Weyr is what the Pernese use when it comes to dragons. My curiosity was piqued and I had to see what these two authors had to say.

Reading the first words was, for me, an unfortunate case of deja vu. It was like I was in the Twilight Zone when I read the terms  almost familiar mixed in a story line that was even more familiar. Desperate to be proven wrong, I read on.

The terms used seemed like Pernese knock offs. Even the dragon eggs (the wyves) had a familiar description. The story line seemed to be loosely based on one of the Pern off-shoots -unfortunately again the first one I read and still my favorite- Dragonsong. Thrace herself seemed to be a more despondent echo of Menolly, Lessa, and Brekke.

After flashbacks (both mine and Micah's, the main character) there came another realisation for me.
The romance and the other characters, Eli and Jura, are written in the Tsundere "character development process that describes a person who is initially cold and even hostile towards another person before gradually showing his or her warm side over time."  Shades of Naruto for me!

I cannot fathom a  Pern Tsundere-slash-Naruto moe. But I have a sneaky suspicion that the authors have also been deeply affected by Pern and/or are closet Otaku and may possibly not have realised how heavily it came through. I may only have caught it because I wished I could have transported myself into the futuristic/backward off-Earth dragon planet I still love. And to pay homage to that, I cannot, in conscience, award this book a 0. I will give it a 1 for, as my favorite writing teacher used to say, the effort and the ballpen ink.

Review Based On An ARC Sent By Netgalley

Written together with Ramona

Posted by multitaskingmomma at 4:53 AM

Email ThisBlogThis!Share to TwitterShare to FacebookShare to Pinterest
Labels: ARC, GenFic, Sci-fi/Fantasy, YA