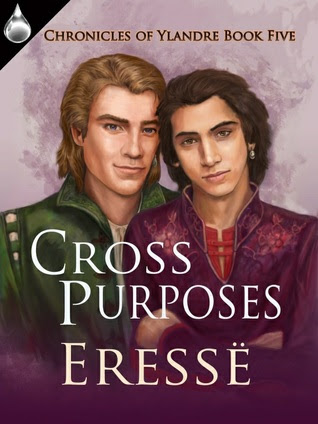 
With love, the line between happiness and heartache is all too easy to cross.

One of Ylandre’s most prominent nobles, Keosqe Deilen may have had it all in terms of wealth, power and social rank. But in matters of the heart, he was impoverished. Such was the consequence of falling in unrequited love. Though he hides that love and his sorrow well, a few inevitably see through his masquerade.

Young Tristen Marante is quick to discern Keosqe’s pain. His blunt sympathy is a balm to Keosqe’s wounded heart as much as his beauty is an effective distraction from the noble’s hopeless yearning. But Tristen is a skittish would-be lover, whose reluctance to express his affection is as much an impediment as the lack of reciprocation from Keosqe’s first love had been. Whereas Keosqe seeks intimacy, Tristen shies from it, suspicious of the motives behind his pursuit and unwilling to yield his heart so easily or soon.

With such different perspectives toward lust and love, is it any wonder their path to a common goal is strewn with stumbling blocks and paved with false impressions?

Although reading the books separately is no problem for each book is written to stand on its own, it is still best to read the series in order of publication. This way, the full experience of everything that is Ylandre can be read, enjoyed and eventually loved.

I connected with Tristen and Keosqe very well and I was really sympathetic to their plight. Tris is so young and his relationship with Kes could only be likened to that of a 18 year old immature young teenager with  a man who could only be in his thirties or older if their world matched were Earth. This practically makes Kes a cradle snatcher. It is not surprising that their different levels of maturity and experience could ruin their chances for an angst-free relationship. Immaturity on Tris' part drove him to question something that should not be and Kes held on to him too tightly that it resulted to some bit of rebellion. And then there was the education or the college involved. What young teen would not want to go out with friends of their own age? Comes in Mirdan who makes things uncomfortable.

This love affair wove itself beautifully into the world that is Aisen. We are again made familiar with the history of the Deire and the course of events that leads us to this present year. All throughout the story, the readers get a chance to reflect once more on Rohyr's and Lassen's love story as well as the other major characters in this world like those of Dylen and Riodan and Ashrian Mithani who becomes Tristen's mentor.

I just had to give this a 5 stars, I could not help it. The beauty of Eressë's writing is her ability for continuity in her Chronicles of Ylandre Series that it astounds many readers, including myself. I noticed that it took her a looooong time to come up with Book #5 but when she finally did, she did not disappoint and pushes me to read the series all again. I wish to say this is a must read, but in doing so, I recommend this WHOLE series as a Must Read for those who never got the chance to read it.

Posted by multitaskingmomma at 4:37 AM