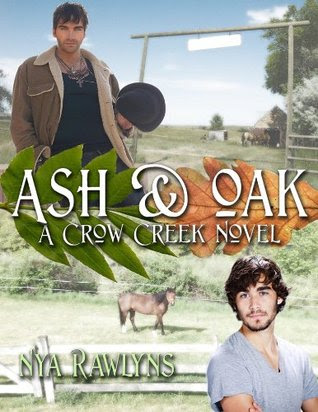 Ash MacBryde thinks he knows what he wants. When his sister offers him the chance to return to his roots and take over running the ranch, he jumps at the chance. Ranching has always been his first love but it doesn’t fill the long lonely nights.

Oak Richards’ career is skyrocketing, earning him national recognition in his sport of endurance racing. But after an unfortunate riding accident, when his mentor and lover decides Oak is no longer flavor of the month, he’s cast adrift.

Will a little luck, a healthy dose of fate, and a matchmaking sister conspire to bring together two damaged men living two thousand miles apart?

For the shy, reclusive Oak and the domineering, territorial Ash there’s more than distance separating them. When they finally meet, sparks fly; but it will take more than just a powerful attraction to bridge the gap between them.

Ash and Oak is a simple love story written in a light manner that leaves the readers feeling the romance between two men: a cowboy and an endurance horse racer/trainer. Both men have their personal tragedies and angsts to live with but when they meet each other, there was an immediate connection. It does not matter they meet each other without actually eyeballing one another. Ash sees a picture of Oak from the internet and proceeds to make it his own personal wallpaper while Oak sees Ash's picture from an album Ash's older sister keeps while creating a blog for the farm.

The story is in all actuality a blind-date gone really well thanks to the intervention of an older sister whose own personal angsts are ignored and energy focused on making sure her little brother and friend find each other and fall in love.

Well, it worked out well but as all novels of this type, readers have to go through the formula of angsts and resolution with the eventual happily ever after ending.

This was a very light read and there were times when the writing would jump all over the place. Fortunately, the jumping would settle down and the readers will never lack for connecting with these two men.

This is the first time I have read Nya Rawlyns and I found myself relaxed when reading this. It surely made up for the SNAFUs I had to contend with these past few days or hours so I am glad to have read this.

Ash & Oak is a good, light, romantic read that anyone can bring to bed with them to sleep with a smile on.
Posted by multitaskingmomma at 9:22 PM