Review: Chronicles of the Shifter Directive Series by Scarlet Hyacinth

I have just discovered a new fantasy series that has me in knots and driven me to bite my nails in anticipation for the events that are quickly unfolding. I decided to write one review for the three books not only to save time, but to guarantee that all should not miss out on this new Scarlet Hyacinth creation that has made me reassess her talent as a storyteller.

Once done reading Book 1, I immediately went into discussion mode with ~♥ Elle ♥~. We both concluded that this is our newest favorite series and cannot wait for the third installment.

When reading this series, just like any of the best fantasy fiction out there, it is best to read this in order of publication. There is no going around this for the stories flow into each other and continue where the previous book left off. 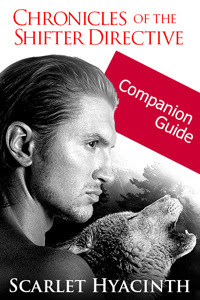 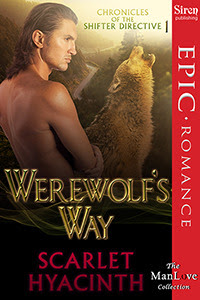 Hundreds of years ago, werewolves and vampires started a war that nearly wiped out all of humankind. They lost, and to pay for their crimes, they became the slaves of the draechen, trapped by the provisions of the new Shifter Directive.

Now, Alpha Graham Powers still maintains hope that he will be able to free his people. When he is captured by a draechen patrol, he finds someone who might be more important to him than freedom itself. His mate, Caelyn Sutharlainn.

Caelyn is a sprite, belonging to a species that tried to cooperate with the nearly omnipotent draechen. But when Caelyn meets Graham, he knows he cannot allow the strong, proud Alpha to be crushed by the draechen’s ruthlessness.

Together, the two attempt to flee the draechen forces. But does their love have a chance of holding its own against an empire? Can the werewolf and the sprite find their way in a world that refuses to accept them? 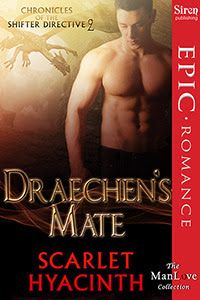 Black dragon Karein Tersain is the ultimate soldier. He has fought to contain the werewolves and vampires who once nearly destroyed the world, enforcing a Shifter Directive he doesn’t really believe in, all the while struggling with nightmares and plagued by restless guilt.

But as his two hundredth birthday approaches, his time is running out. Without a mate, he risks being killed by his own people. To top things off, his father, the draechen emperor, arranges his marriage with a fae, Sari Norrenddare.

A political match is the last thing Karein needs. Or so he thinks, until he meets Sari. The moment he sets his eyes on the beautiful fae, Karein realizes Sari is his true mate.

But even as the two men fall desperately in love with each other, Karein’s family aims to begin a war with the fae. Can the strength of one mate bond change the destinies of two peoples and save the paranormal world from chaos?

I love my dragons and I love my fantasy books, especially when it involves all things fantastical like magic, fae, dragons, and other paranormal beings of the physical and spiritual world. I usually grab these books and just inhale the stories but then get frustrated when the stories just don't make the cut for me.

This is a story about shifters and how their history affected a change that resulted to a Directive that placed the different species in order of Castes (with the resulting caste-related bigotry) and their world under the firm grip of the Draechen or Dragon shifters. As the centuries passed, the Directive became a choke collar that was hard to live with and even those who were in power started questioning its validity in the present world.

Deep in the heart of this arc are two men who sacrificed their love and lives for the good of all: fae prince Talrasar Myrthylar and his dragon mate Kaelezrin Tersain. Theirs is the Great Sacrifice that ensured the existence of the Directive and yet theirs is the same story that should guarantee the end of it.

Woven in are the many major characters. In Werewolf's Way, we have Alpha Graham Powers and Caelyn Sutharlainn. Their relationship spark off a scandal of such proportion that guarantee other shifters like Black Dragon Prince Shtama(karein)Tersain and his mate, Prince Sareltae (Sari) of Draechen's Mate, to question the Directive even harder as they realize they are true mates themselves. The lives of these four men, plus those of the minor characters, are ingeniously written to guarantee readers a fantastic read.  At the back of the reader's minds is always the question of the two sacrificed princes.

There is romance, yes, but the readers are also guaranteed some bit of erotica between gorgeous men, a lot of magic and some shape-shifting action that if one were to expect this to be made into a movie, the budget itself would bankrupt a small third world country. This is a series that has a little bit of everything and yet readers are never left lacking. In fact, I have rated this 5 Stars and yet I want to rate it more. This is an amazing shift from what I usually give this author.

What added to my love of the series is that it made me reach out to another fan and discuss it privately. We were throwing out theories left and right, we were thinking of reincarnation and all, and then we found the Companion Guide. This was a perfect addition to the first two books published to date as now we know what is next to come and what to expect from the characters. Through this Guide, all readers will not only get a glimpse of the history, characters (both minor and major), and sub-plots, but the blurbs of the next installments. It is obvious from this Guide that Ms. Hyacinth has finished her series and we are just made to be teased into waiting anxiously on the sidelines.

The writing style of this series is very different from what I know and expect of Ms. Hyacinth. I must confess that in the past, I had placed her works under my "fluffy" reads. Nothing bad mind you, I just categorize my reads this way in my reading list so I know when I am reading something light and fluffy as differentiated from those which are longer and more emotionally or mentally gripping. I have a separate category, Favorites, and in this shelf I place in my obvious loves. This series has made me reassess my previous evaluation of the author and the series is now under the Favorites.

For those who love romance, magic, action, angst, erotica, and more romance which story smoothly flows without getting cross-eyed, it's time to discover this new series: Chronicles of the Shifter Directive.

Posted by multitaskingmomma at 4:38 AM