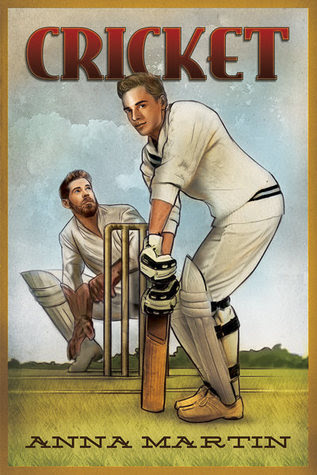 New York native Henry Richardson needs a change. His boyfriend just dumped him, and his business has fallen victim to the economy. But is jumping on a plane after a surprise phone call taking things too far?

The promise of a new opportunity drags Henry away from the city to a tiny village in the English countryside and an enormous manor house his great-grandmother wants to bequeath him. As an experienced wedding planner, he sees the potential in renovating the dilapidated building and using it for events. All he needs is to find some local businesses to provide the essentials.
That’s how Henry meets Ryan Burgess, the shy but hardworking owner of an organic farm. The spark between them sizzles slowly while work on the house continues, but Ryan is deeply in the closet and unwilling to take the last step. They finally find something that clicks in cricket, something that Henry, a former amateur baseball player, is surprisingly good at. For him, cricket helps bridge the gap between England and New York—but unless Ryan can find something to span the divide between his sexuality and his fear, their relationship doesn’t stand a chance.

I have to admit that once in a while I do tend to fall back on fluffy reads to while the time away. Typically, however, I go for the more lengthy novels and I look for those with great plot and character developments. No matter if it is mystery, thriller, paranormal, fantasy, erotic or contemporary/historical romance.This is honestly the first time I have read Anna Martin. I had heard of her, seen the reviews on her other books like Tatoos and Teacups, but never read any of them. For some reason, when I saw the cover and blurb of Cricket, I was intrigued by the premise of an American moving all the way to a tiny village somewhere in England and (knowing this is a romance and not a sporty book despite the title) getting to stay. I was curious as to how this was going to play out. I was hoping this would not be a tale like Romancing The Cricket.

Cricket is a novel, through and through. This is no fluff, this is no novella in the guise of a longer book, and best of all, it was done in such a way that brought images of Somerset to mind to the point that I found myself mentally immersed in this English countryside, their ways and manner of speaking (and drinking, and smoking, and eating). This book reminds me of a book I once read, Castlemore by Charles Mackinnon. The scenery is written in the same manner, the mannerisms of the people were similar, however, the unfolding of events was much faster in that book while Cricket takes us on a more leisurely tour of Henry's life as the "new bloke" in a tiny, but not so teeny, weeny village where all that was American in him slowly got leached and bleached out. Anna Martin's style of writing had the ability to make me visualize the unfolding and development of events. In particular, the incident with the pig. Reading through that short scene got me giggling and snorting. Although the STDs in the beginning of the book should have hinted me on her humour.

As I said before, this is a great English country-side novel about a man and a man who slowly get to know each other, become great friends, play a Cricket game or two, and finally fall in love. And although this is an MM romance I thank the writer and the publishers for not turning this into a hum-drum, erotic-guised commercial book. Instead, we get a quality story written in English, not slanged or pruned. It was almost gently written, if you get my meaning, and it hit just right spot for me which resulted to my loving, dreaming and laughing.

Posted by multitaskingmomma at 5:39 PM