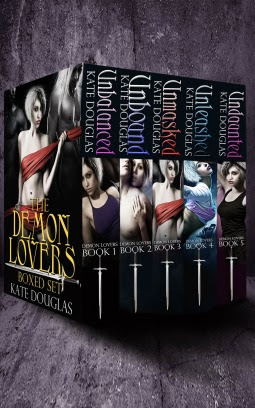 * Also includes bonus material from Dark Wolf, the first book in the Spirit Wild series, and Dream Unchained, the second book in the Dream Catchers series.

From the blurb, one can conclude that this is a menage, or rather an MMF but then it morphs into a an MMMF with the suddenness of a typhoon. Obviously, this turn of events took me by surprise.

Truth is, there were a lot of things that took me by surprise as I kept reading.

Here are just some of the surprises that bothered me:

The books always read that Addie was the reason why Locan and Jett finally found the strength to admit their love for one another. I get it, but where and how did Addie do this? It took me some time to go through all the five books and I never found the actual process. This was a sudden development where no hint or background was given. It was just THERE.

How did Addie know how to recognize Charon? There was nothing in the book other than Azrael implying Charon was the ferryman or boatman in the River Styx. Unless the author was implying that Charon was  the legendary ferryman of the Styx of Greek legends. If so, why not just say so? Then the story could have cohesed better.

Where and how did Addie conclude that she was in love with Azrael? Again, I got lost for there was a lack in terms of process - the process of how this came to be.  But its good she did.

To recap, this had the promise of a great plot, however, it is sad that the author did not bother to develop both the plot and her characters. I actually found them fascinating and I wanted more out of from what I read.

This is also considered as erotica, unfortunately, I found it ho-hum. I actually fell asleep in the middle of a menage scene. What does that tell you?

View all my reviews

Review based on an ARC sent by Netgalley
Posted by multitaskingmomma at 11:59 PM

Email ThisBlogThis!Share to TwitterShare to FacebookShare to Pinterest
Labels: Naughties