Review: Fangs and a Wet Nose (Unmated at Midnight #8) by Joyee Flynn 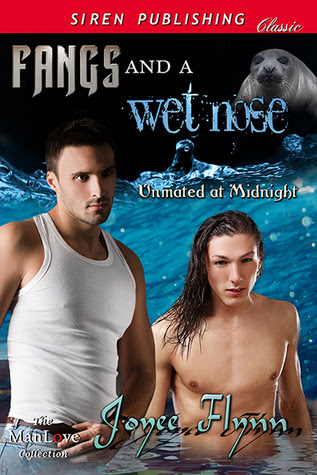 The worst thing for Darius to do when putting his life back together is to desire his son’s best friend. Darius just wants everything to get back to normal and is looking forward to spending break with his son. The last thing he expects is the beauty raiding his fridge or sparks to fly.

Skyler’s young but he’s slept with enough men to know exactly what he wants, and it’s the dream man right in front of him. Except the older god of a vampire won’t touch him no matter what he does!

When a turn of events has them living together for the summer, Darius is going crazy with his teasing. But when he finally gives in to temptation, Skyler isn’t the only one left with bite marks on him, and Darius is left brokenhearted.

Will Skyler be able to keep his wet nose where he wants it, or did he just lose everything because of a mistake he didn’t make?

Note: This book is written in first-person point of view.

Here we have a much older vampire in Darius and contrary to popular myth and arcs of this type, no, he is not a secret billionaire. Instead we have a hard working vampire who can be victimized by economy just like any regular human and he does tend to scrimp and save and make sure to keep working. He has in his son, his hopes and his happiness. This son he cannot do without and cannot disappoint. Imagine his confusion when he falls hard for Skyler, his son's roommate and best friend who his son is also crushing on. Of course, he decides to not do anything with the attraction but it is not helping that Skyler is quite open in his gorgeousness and fabulousness tempting him no end.

As plots go, we can all predict that Skyler gets his man and Darius gets to the point of older-man angsts. Predictable again are the usual tensions expected in this formula. So far so good.

This is very difficult to rate as I am torn between rating it really low and rating it as so-so. Thing is, I found the first 60%-70% of the book really good, however, it soon crashed and burned. The crashing and the burning took me by surprise as it was neither expected nor predicted. I thought things were alright between Skyler and Darius despite the obvious older-man-younger-man angsts expected. Then that surprising twist just came out of nowhere and before I knew it, my liking for Darius fell to degrees to the point where I could no longer reconcile his character as the "leading man." After that twist, there was no recovery for me when it came to him and I really hated him and the outcome - despite it being an HEA.

I wish this could have ended better. I was hoping Skyler would get someone better. This is the turn of events that I do not like nor want to face again. So yes, this is difficult but I must rate and it is quite low. Terribly disappointed. Hopefully the next installment is happier.

Posted by multitaskingmomma at 10:57 PM