Review: Heavenly Scent (Scent of a Mate #3) by Stormy Glenn 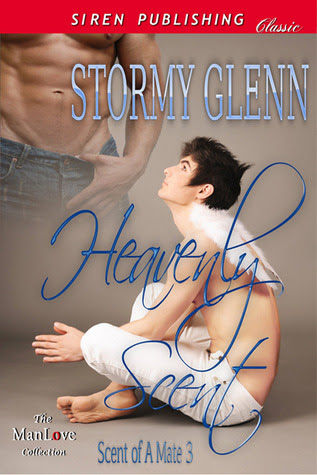 Heavenly Scent (Scent of a Mate #3)

Jude Mason and his identical twin brother are ocelots. In the paranormal world, that means that they are less than everyone else. They are considered abominations, chased from one pride territory to the next, never knowing if someone is going to attack them or where they might find their next meal. When Jude stops off at a local bar to get a glass of milk, he finds the one thing he thought he’d never have—his mate. There’s just one problem…his mate is human and knows nothing of the shifter world or the bond that just formed between them.

Tripp Van Buren never imagined he’d fall for a geeky little guy with glasses and a surprising giggle. But after meeting the strange man, he can’t stop thinking about him. It’s almost an obsession. And so is the need to keep Jude protected from everything. When Tripp goes back to the bar for Jude, he discovers a world he never had a clue about—shifters, mates, claiming, mating heat, and something different about Jude that takes them all by surprise. Tripp knows that if he wants to stay in this odd world with Jude, he’ll need to learn everything he can about it. But will he still want Jude after he learns just how unique Jude is?

For such a telling blurb, the story did not quite follow through.

Tripp and Jude's story did not start all that romantic, it was rather hilarious. Tripp is an ÜberAlpha male who is most definitely human while Jude is a twink-slash-submissive-slash-alpha-elder-thingy. Okay, that was confusing. Let us start over.

Tripp sees Jude for the first time in a bar drinking milk (Jude seems to be addicted to this stuff) and finds him like a funny dude who was very cute - even if Tripp finds himself tripping over the simple fact that Jude is defo not his type. He is cute, adorable, adorable and adorable. Soon, they find themselves in a compromising position, then they sorta break up and within a few hours Tripp finds himself with arms full of Jude once more, his bff, who turns out to be a beta in his own pride, is incredulous and the twin Patch is like... just... there. Then he literally fights his way and stumbles into the paranormal world. He is too alpha to be a human and yet.... Then things scramble up, add in a few more deets and we get Jude turning out to be some Super Ocelot Regal Elder with some really weird and inexplicable super-powers and they get the obligated protection from the same pride that started out as the very ones who were likely to eliminate Jude and twin Patch.

Whew! Have to pause here a minute and digest what I just wrote.

The romance is definitely happening. The story is fast paced, as in VERY fast paced, but there is really nothing resolved. So I am left wondering, is this a Book #3? Is their story ever going to be solved or explained or something? There were just too many holes in the plot that were never quite filled up. Whatever explanation done here just skimmed the surface at the very least.

I don't know, but somehow I cannot quite connect this with the first two books. I feel like I stumbled into a completely different series within a series. If this is the intention of author Stormy Glenn, then I laud her for surprising us with this unusual turn of events in the Scent of Mate Series. I will be looking forward to Patch's story, Heart of a Mate, who is definitely mated to the pride Alpha Hugh's brother. Which it may be, no idea, but that is practically the last hint in this book. Sorry to spoil the fun, but I feel this is an incomplete book. (Update: seems like it is Otto! and he's only one of two mates! Ha!)

I guess we have to wait out for Book #4 then, just to find out what in heck is going on here? What do you think?

Posted by multitaskingmomma at 8:24 PM