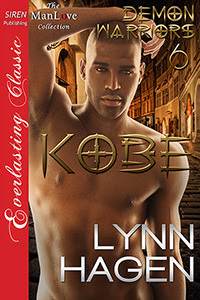 Kobe by Lynn Hagen
My rating: 4 of 5 stars

Zion had sacrificed himself to get the Demon Warriors out of Remtin. Now who was going to save him? Resigning himself to a life of hell, Zion reluctantly accepted his fate. That was until the Demon Warrior who fascinates him beyond all reason risks everything to rescue Zion from a fate worse than death.

Kobe was the son of the notorious Sebastian Krule, the meanest cutthroat to ever live. More than once he had felt the hand of abuse from his father. He should have turned out insane, or at the very least, cold and uncaring.

But when he meets a demon with big blue eyes and finds out that Zion has traded his freedom for the safe passage of the Demon Warriors, Kobe sees beyond his brutal upbringing. He sees a man who is affecting Kobe in ways he had never experienced before.

Kobe has to not only gain Zion's trust, but figure out why his father has shown up in Serenity City. There could only be one reason and Kobe is determined to be the one who walks away from their deadly reunion.

I have written before that I have this love/hate relationship with Lynn Hagen books and series'. I love to love them andI love to hate some. I get frustrated over some plots, some characters, some situations, even the crying of the constant mine drives me insane for some reason. However, just like any Lynn Hagen addict (OMG! I just revealed I am an addict!) I cannot wait to get my hands on the next installment of whatever series she releases for the moment.

I don't know, but for some reason I just love this series. It constantly changes, it is fluid, its plots are different and evolve, and to top it off, demons they may be, but they are both mean and sweet. For Kobe, I did not relate all that well with him. I don't know, he just grated on my nerves. I have a completely different response with regards to Zion though. He just became my favorite character of all of the Demon Warriors Series characters.

There was one scene where Zion was clutching at this Fresh Linen scented candle that Kobe had given him. Of all the things he could have offered him, he chose this one simple object. I don't blame him, I love this scent too and have several scattered around the house. Maybe this is the reason why Zion just stuck with me.

Kobe had his moments,too, don't get me wrong. He grated on my nerves as I said earlier, but there was this one scene that made up for all of his shortcomings. He did not shout or scream or make a public fool of himself by shouting mine, instead, he just said it softly and sweetly and ooooh, überromantic. I just fell for that scene. That scene alone made it up for Kobe.

When I was reading Zion (I read this twice, focusing on Zion all the time), the scene with him protecting his candle just kept haunting me and I recalled this ad I had seen. I found it and I couldn't help but post.Although this is not exactly the same, you get the drift....

View all my reviews

Posted by multitaskingmomma at 9:29 PM