Review: Parting Shot (A Matter of Time #7) by Mary Calmes 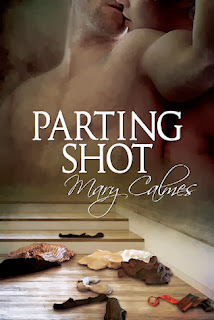 A Matter of Time Story

Life has never been easy for Duncan Stiel. His childhood was the stuff of nightmares, and his day job as an undercover police officer forces him to hide his true self and occasionally lands him in the hospital. So when he finally meets the perfect man, it comes as no surprise that everything falls apart around him. What Duncan doesn’t expect is that the hardest hurdle to get over before he can make a life with Aaron Sutter is the one inside himself.

Everyone thinks Aaron has it all—looks, money, fame, and success beyond measure. Everyone, that is, except Aaron. At the end of the day, the cameras stop flashing, friends go back to their own lives, company business is handled, and Aaron is always alone. The moment he meets Duncan Stiel, Aaron knows he’ll do anything to hold onto the larger-than-life detective. But when he realizes money won’t buy him the ultimate happiness, Aaron needs to find the strength to give Duncan something much more important—his heart.

It was exciting to read on Mary Calmes' blog that she was releasing another installment to one of my favorite series A Matter Of Time. Just as I was starting to read the series again, she sends out the good news and needless to say, I made sure to grab on to this as soon as it came out.

In Parting Shot, we meet Aaron and Duncan who create their own heat between the sheets and out, right after they got together thanks to Jory Keyes who sets them up on a blind date in the sixth book. However, we do not see Jory here, only his beloved Marshall, Sam, who comes in for only a few pages and all the rest is Duncan and Aaron.

This relationship between a billionaire and a cop should have gone BAD if left in the hands of an author other than Mary Calmes. But as it is Ms. Calmes who wrote this, it shows her talent as a story teller which leaves many of her readers on the edge and on the heat. This is one HOT BOOK! And no, there are no fifty shades here - TGFT!

Here any unresolved issues in Book 6 are finally laid to rest. Those of us who are Jory fans and lovers will now get our good night's sleep knowing that Sam is his man all the way through thick and thin. Those who do not know what I am writing about here now must turn to the series and read it. We also get to see the real Aaron. You know? That obnoxious fellow who got too close and personal with Jory? Holy cow, I hated this guy then, but fell in love with him here in Parting Shot. He finally gets to tell his story albeit this is all written in Duncan's point of view.

There are some things that I found silly here, like their getting into some serious situation because of some stupidity that Aaron did but then again, this is much like the rest of the series where anything ridiculous is loved and expected. Aaron may be a billionaire but he is still a civ. Hence, Duncan's frustrations.

In short, this is a romantic-erotic-silly-ridiculous-cheesy love story between a billionaire and his cop with some live action here and there to show off Duncan's muscles and machismo and which finally ends with a HEA.

Hot. Romantic. Cheesy. Yups! Just the right formula for a must read.

Posted by multitaskingmomma at 5:42 AM