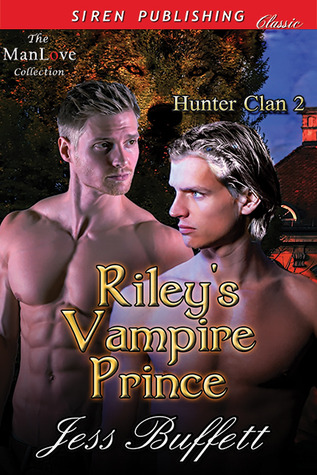 Purchase Link
Published May 22nd 2013 by Siren-BookStrand, Inc.
My Rating: 4 of 5 Stars

Riley McLeod has never gotten over the loss of his family to murderous Vampires, and often hides behind his sarcasm and carefree attitude. So imagine his shock when he discovers he is not only mated to one, but his mate is the Prince of the Vaucluse Coven.
When Caleb Vaucluse arrived at the Hunter Clan, he never expected to meet his mate. His joy soon turns to devastation when he learns that Riley fears him. Caleb struggles to get passed Riley’s defenses and prove that they are meant to be. Unfortunately just as they come together, pride and old wounds prove hard to overcome for the pair, and threaten to tear them apart for good.
As an enemy is revealed and more questions are raised, Caleb and Riley have choice to make. Do they keep their pride and stand alone, or stand together and embrace the love fate gave to them? 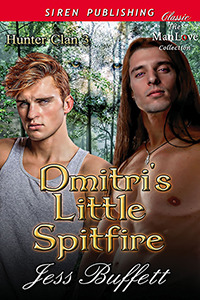 Elijah Collins is ashamed. Used to hurt his friends by Potestas, he now finds it hard to even look someone in the eyes. Especially Dmitri, his mate. When a truth about Elijah is discovered, Potestas also find out. Now that they know his true worth, he becomes an even bigger target than before.

Dimitri Kalas has always prided himself on being calm and in control. It is his job to help protect his Clan, and most importantly his mate. However, when he finds out that the enemy responsible for hurting the people he loves, have also been abusing his mate, he becomes incensed.

Will Dimitri be able to convince his mate that he is worth love and forgiveness? Or will Elijah allow his guilt to consume him and turn himself over to the enemy in order to keep his friends safe?

Once again, or twice again, Jess Buffett has managed to make my day after having been disappointed yesterday on the reads I had to endure. This series needs to be read in order, this is a must for everyone to know before they go ahead and read. In The Kayan's Mage, I first met Riley and Elijah.

Riley: I had commented that Riley was my favored character for he was quirky, no hay tapadera, and the complete opposite of his twin brother Sawyer. I am very happy that author Jess Buffett not only managed to perform a minor miracle when it came to the continuity of her stories, but the essence of who Riley is stayed true to form. I absolutely love this character. He has his weaknesses covered by his snarkiness (to losely quote straight from the book) and yet his strength was in this weakness.

Elijah: Oh my. This one was a total surprise. I was ready to absolutely hate this character (and I think I did after that first book) and yet there is a complete turn about and it just shows us we should never judge anyone by their covers - sounds cliche but so fitting in Elijah's case. Him turning to be a dragon! This is the WOW factor for me especially when he showed his strength, saving his mate (a totally different take on the alpha here Ms. Buffett) instead of the other way around. There was a nice bit of action here and the appearance of more of this fabled winged beast just about made my day and the dragon fantasy lover that I am.

Caleb and Dmitri: Hmmm, I must confess these two were a bit formulaic as mates in my opinion. These two did not get me quite as much as Elijah and Riley did. However, having said that, they were CUTE! Really, I felt like these were the fitting men for the two men and I liked that even if they were formulaic as characters, there were some stuff they did that were unique only to them.

The Epilogue: Okay folks, I have come to rely on these last few words from the author. In Hunter Clan #1, I cried that this was a teaser. I guess I was right but now I know that these little last bits are what should clue us in on what is coming next for us readers. This is a different approach in my opinion for I have not seen this done before.

The Plots: I am going for honesty here and I must admit that Riley's Vampire Prince disappointed a bit for there were unresolved issues left open. However, as I read Dmitri's Little Spitfire on the the next turn of the page, I could not care less that there were unresolved issues for clearly this third installment resolved those very issues. Therefore, my disappointment lasted as long as about, hmmm, two seconds before I clicked Next and opened the third installment?

For those who are thinking of reading this series, I must reiterate the need to read these in order of installments. The series flows and melts literally into each other. It would be an impossible feat to follow the plot if not done this way. The best thing about it is that the plot actually develops, the romances between the men are a bonus as well as the romantic scenes between them. This is another thing to take note of, this is very important: the erotic scenes between the men do not make for wasted page. The series is something to be enjoyed and as it develops, there is always something new to discover and anticipate. This is what makes this series different from the others of the like.

Posted by multitaskingmomma at 10:50 PM