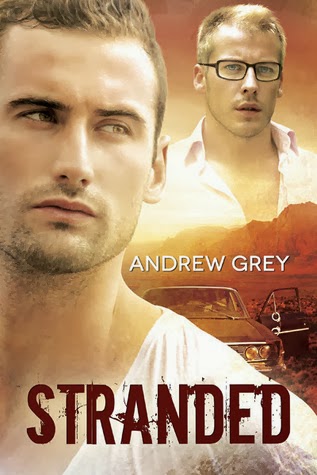 Kendall Monroe is handcuffed to a car in the desert.

Is this life imitating art or art imitating life? The only thing he’s sure of is that the situation he finds himself in is a copy of a scene he filmed earlier, only this time, there is no director yelling “cut” and no crew to rescue him. Terrified for his life, Kendall takes comfort remembering happier times with his long-time lover, Johnny. He hasn’t seen Johnny in weeks since Johnny stayed behind to finish his latest best-selling novel.

As he attempts to survive scorching-hot days and freezing nights, Kendall tries to figure out who did this to him. Could it be Johnny, or the research assistant he suspects Johnny is having an affair with? Both options fill him with bitterness. Or is it a more likely suspect? Kendall has a stalker who sends him flowers and always seems to know where he is. But what does this stranger have to gain by leaving Kendall stranded in the middle of nowhere?

Stranded is not the usual formula readers are used to when reading a Grey book. I for one love that formula but I was ready to love this one even after reading what he wrote in his blog stating (or warning?) that this book is a total departure from his usual and he was excited to get it out and know what we all think.

Well, not to sound repetitive but Andrew Grey has done it again! This may be a departure from the usual but it still had the same results: I could not put the book down, regardless of the fact that it took me some time to accept that this was a Grey I was reading!

The difference this book makes from the usual Grey starts from page one and ends in page 200+ something or other. Instead of the usual blow-by-blow account of the romance between Kendall and Johnny, we get flashback scenes of their early days before careers and schedules keep getting in the way and both were still in that honeymoon stage, before the committed-but-taking-for-granted-each-other stage they find themselves currently in. These flashbacks are interspersed between the present scenes where we see Kendall working miles apart from Johnny and questioning the future of their relationship. Things get complicated when on top of the personal angsts Kendal goes through, a stalker nearly kills him.

On that note, I guess this is really where some would question the sanity of the author. Some would say that the scenario of getting stranded in the desert for two days and after the rescue goes on directly into filming was impossible. Gulping down Gatorade and all. Reading through the scenes, however, I must give kudos to Grey for his research. Two days may sound harsh, but it is not enough to kill anyone as the body has reserves it can fall back on before it starts to break down. He did not write in gulping in water or Gatorade either. He wrote Kendall sipping liquids, gradually increasing the amounts. The Gatorade did not come in until much later and the rebellion of the stomach was mentioned before it settled down. There were no solids taken until much, much later and only in small amounts to prevent rejection. As for the non-hospitalization, as long as the body did not show signs or symptoms of anything untoward, especially considering Kendall's physique and health, it is not really all that improbable. (However, I personally would have advised some hospitalization just to rule out complications.)

The mystery of the stalker was something that kept me guessing and I was surprised it turned out into the one character I had actually dismissed. That one surprised me, especially the resulting end which I will not reveal here.

As for the love between Kendall and Johnny? Theirs was a romance that honestly made my heart go pitter-patter. Especially as I kept getting mental images of John Barrowman as Kendall and Scott Gill as Johnny.

Stranded is different, yes,  but it is a fantastic different read that should never be missed out on. I just loved it.