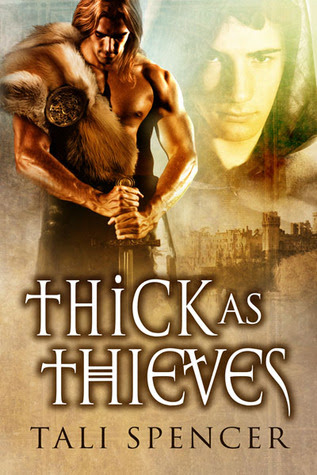 After Vorgell the barbarian fucks himself with a unicorn horn, he ends up in a cell with Maddog, a pretty young thief. It’s lust at first sight for Vorgell—but honestly, he can’t help it. Unicorn horn is a potent aphrodisiac, and now he can’t stop thinking about sex. Luckily, Madd is one male witch who knows how to put Vorgell’s new magical body to good use when he tricks Vorgell into a kiss that helps them escape.

Vorgell may desire sex in general—and Madd in particular—but Madd has no intention of being screwed by a man twice his size. He has problems of his own, including an enchanted collar that causes him to desire his most hated enemy. He wants that collar off as soon as possible, but that requires stealing a basilisk egg from the castle they just escaped.

Drawn together by lust and magic, the two men join forces and soon find themselves up to their necks in witches, wizards, and trouble. Vorgell and Madd might just be perfect for each other, but first they have to survive long enough to find out.

I did a double take when I read the first lines of the blurb. I simply could not believe my eyes when I read it. It seemed like Dreamspinner put a joke out or something. I had to read that one line two or three times just to be sure my eyes were not fooling me before I hit BUY and ended up with one of the best reads and laughs I have had in a long time. Who would have thunk it?

For those of you who have never read this, I think its about time you picked this up. Why?

Okay, I can think of lots of reasons but one and the topmost reason I have is throughout this book, no matter if the scene involved some erotica or some angst, the least I did was giggle. Think of it this way: erotica is supposed to get the reader all hot and (bothered) and then some. I read the sexy scenes and they were super HOT! but I was giggling and laughing my way through reading a particular main characters' inner thoughts and ramblings describing the scene and the act and the organ in such a manner that was just too funny I actually snorted. Honestly, I think Tali Spencer was in such a great and fooling mood when she wrote this. As for the fantasy, magical and mythical part of the story? Well, read on dear readers - I am a fantasy lover at heart and this ran circles around some of my favorites.