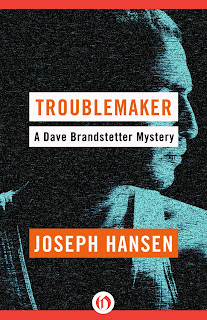 A totally engrossing classic mystery detective story set in the 70s that plays out like a movie.

Who killed gay bar owner and all-around nice guy Rick Wendell? Was it Larry Johns, the attractive young man found wiping his prints off the still-smoking gun mere moments after the murder? If so, why was Johns naked? And what happened to the large sum of money Wendell had just withdrawn from the bar's bank account? Hard-boiled, openly gay insurance claims investigator Dave Brandstetter aims to find out in Troublemaker, the third volume in Joseph Hansen's legendary and critically acclaimed Brandstetter mystery series.

One of my pet indulgences is to watch some dark detective film noir, it does not matter what year they were made. My pet of all film noirs was this paranormal TV series (sorry for those who sigh on this one) that I got addicted to way back in the 70s: Kolchak: The Night Stalker, a Universal TV series that starred  Darren McGavin. I also need mention that the idea of a gay detective is not unfamiliar to me. Another one of my favorite MM TV indulgences,  is watching Stevenson's Donald Strachey detective movies. So yeah, I was intrigued, and it was not long before I got caught up in the mystery thriller.

That said, for some reason, while reading this series, the image of Kolchak kept creeping into my mind - but a gay and good looking Kolchak. So yes, despite my hesitance to read a book first written in the 70s, not to mention the third of a series, I found myself getting more and more intrigued with the idea of Dave Brandstetter.

It also took me some time to get my mind wrapped around the 70s setting, but having grown up in that era, the times became a reminder and that was the point where I got comfortable and read this through last night.

I loved how descriptive author Joseph Hansen got. It was this descriptive quality that drove me deeper into the mystery and it felt good not to watch the noir with eyes but instead get to watch it in my mind  playing out from the words of Hansen. For some reason, the mystery deepened even more and I really enjoyed myself.

For those who love mysteries like I do, go ahead and read this. Just make sure to forget the present days and times, like the money exchange rate of today, and think of the mystery instead. I must warn though, this is Zero Erotica Rating and the relationship between Dave and his partner Donald can be a little shakey at times but foundations are solid, and the other characters involved can get anyone frustrated.


Review based on an ARC sent by Netgalley
Posted by multitaskingmomma at 6:17 PM