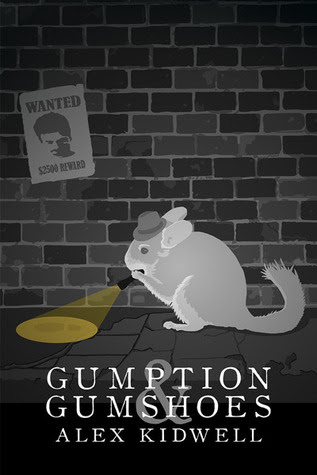 August Adahy Mendez would rather be buried in the world of his detective novels or a good film noir movie than in real life. He’s overweight, undermotivated, and stuck in a dead-end job. As a Chincha, he’s part of a long line of chinchilla shifters, but the greatest accomplishment in his life so far has been moving an hour away from his close-knit herd. That all changes when August’s grandfather leaves him enough cash to pursue his dream: becoming a detective himself.

Sam Ewing is a bitter divorcé who enjoys watching football and being alone. It’s easier when his only interaction with people is when he collects rent from his office building tenants. Then August rents space from him to set up his new detective agency, and Sam is drawn to him despite his misgivings.

Sam soon finds himself involved with one of August’s cases, and the men join forces to catch their criminal. The greater challenges they face, however, are how August makes Sam want to give love a second try and how Sam makes August believe that real life might be even better than fiction.

This is another of ~♥ Elle ♥~’s  recommendations, so obviously I took it to heart and read this, despite the fact the  cover art kind of confused me a bit. If I were to judge a book by the cover alone, I would dismiss this book as some Tom & Jerry type of cartoonish MM story. Boy, was I wrong!

First off, this is not a typical MM story where the alpha male is characterized as the quintessential hunky male complete with 6 or 8 packs of abs that can rival the men of 300. Neither is this one about a sexy twink....

Okay, I admit it. This is a story where the quintessential  hunky male character DOES have the required six or eight packs straight from 300, but that is all where the similarities end. August or Aug or Auggie (depending on who is addressing this cute man) is not a twink in the most obvious sense of the word. In truth, he is neither sexy nor feminine. Instead, we have this round, (fat) heavyset (depending on whose interpretation it is), sexiness of a man with soulful eyes, armed with the cutest smile and the most irresistible charm.

Okay, so yeah, August is an august man, well, from Sam's point of view, which, for all intents and purposes, finds in Aug the epitome of the perfect man. Even if said man describes himself as that awesome Ghost Busters marshmallow man that wrecked havoc in the streets of New York.

It upset me when I read the last words. Sigh, this would make for a perfect first of a series where August and Sam can build their own Gumshoes series as full blown detectives. I would also like to read how the meet with the family goes so yes, my curiosity is getting the worse of me, imagining what would be, if only the author, Alex Kidwell, would please just spare me the misery of hoping this is just the beginning of a beautiful pseudo-noir series that brings readers into the world of mystery and more gumption from Aug.

This was a hilarious read, thanks to the appearance of the cutest shape-shifter in my history of reading about shape-shifters. The way he would somersault in the air and cling his claws onto the skin of his lover or his nemesis! (Oh my, he sent me to giggle land at around 2 a.m. waking up my grumpy Dobe in the process and wholeheartedly growly-scolded).

This is the perfect book to rid anyone of any angst. This is cuteness, romance, sweetness, clawness, and chichilla-ness. I may label this as a light read but this is a light read that sent me to forget any sourness a day can bring. Usually I would rate a light read as a 4 Stars, tops, but this one tops then all, so yeah, its a 5 Stars folks.

Posted by multitaskingmomma at 2:57 AM