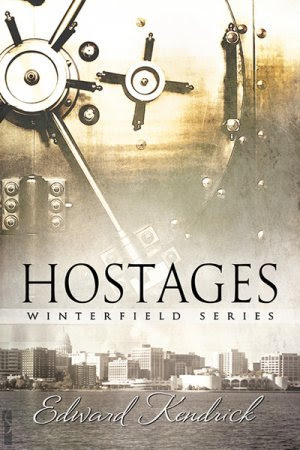 
An attempted bank robbery brings five customers and a doctor together when they are taken hostage by the robbers. Can Tabitha and the five men--Preston, Bing, Ezra, Randy, and Marc, foil them without one of them dying in the process?

'Breaking news--A bank robbery attempt has turned into a hostage situation. According to a police spokesperson, four men entered the bank at ten-thirty this morning intending to rob it. Someone activated the silent alarm, bringing the police to the scene. Accounts are sketchy but it has been reported via text messages from a customer inside the bank, the security guard was shot. His condition is unknown at this time. A few minutes later two more shots were heard. According to the police there were two tellers, two other bank personnel, and five customers inside the bank when the robbers invaded. We will keep you updated as more becomes known.'

Thus begins the attempt by Tabitha, Preston, Bing, Ezra, Randy, and soon, Doctor Marc Rivers, to foil the robbers and regain their freedom--without being killed in the process.

Hostages is Edward Kendrick's version of A Winterfield Reunion Of Sorts. This is a very short novella and is really a great way to take a peek into the lives of these Winterfield men and (lone) woman characters we all read to love and admire.

In Hostages, we get a situation where the better halves of the men get caught in a bank robbery. They do their thing, they show their bravado and skills that ultimately lead to the end of the story where we have the criminals either dead or dying or off to prison.

I finished this in under an hour, around 35 minutes to be frank, but it was a great and fun short read. It was nice seeing all the Winterfield men get into action once more. And that ending! Oh boy, Mr. Kendrick, I want that ending to be the window for a 6th installment! Please, now I am really, really curious! Please, is there a 6th?????????

Posted by multitaskingmomma at 8:01 PM