Review: The Omega in Control (Luna Werewolves #2) by Marcy Jacks 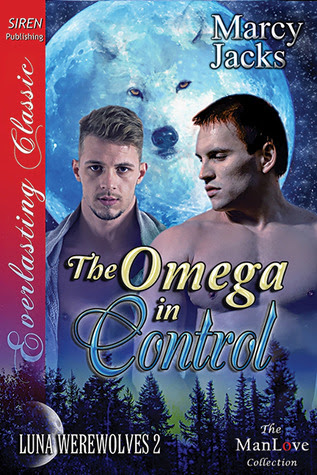 The Omega in Control (Luna Werewolves #2)

Josh Carpenter has almost literally run into his mate, and after living his whole life believing he would never have one, he does not want to let Taylor Cadman get away so easily.

Taylor grew up believing that alphas were cruel to their omega mates, and if Josh wants to mate with him then Taylor will do it on one condition. Taylor will be in charge.

It goes against all of Josh’s instincts, but if it means he can keep his mate, then he’ll do it. Truth be told, being a submissive isn’t his cup of tea at first. But as Taylor open’s Josh’s mind to the sort of sex they can have, he begins to realize that taking the submissive role doesn’t make him less of an alpha.

Then their relationship is tested to the extreme when Taylor comes clean about his bloody past, and a group of rogue wolves attack, threatening everything the luna werewolves have built.

The story of the building of the Luna Pack was really well done, especially when the presence of more Luna Wolves coming in at the most opportunate moment was unexpected but welcomed by the pack and by myself. I was sort of getting desperate here for the pack not to get dessimated being outnumbered and all. There was quite a bit of action here - the wolf fight was pretty messy and painful to the imagination. Marcy Jacks is quite descriptive when it comes to bites, pounding and smashing and gore, so I felt the pads of my feet tingling at the gore. This is surprising as I am not in any way fearful of gore. The tingling was good!

However, the Omega In Control was a bit of a disappointment in terms of the romance between Josh and Taylor. Theirs was a romance that did not quite reach me as much as Roarke's and Westley's did. There was a bit of BDSM and sex toys in the mix, but again, it did not quite work for me either. Although I must say that the thought of an Omega being in control does not have that same kind of impact as an alpha doing the dominating so that may just be it. However, as I said, the overall arc of the series was well written and the plot for the series developed very well. This is the main reason why I rated it a 3. So yes, I will definitely rate this as one series that I am most likely to follow, especially after that ending and sneak peek! Again, curiosity if getting the better of me, but in a truly good way.
Posted by multitaskingmomma at 8:29 PM