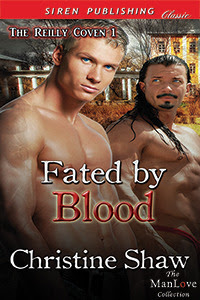 
Choosing one's mate is a special occasion. The knowledge that you both have chosen each other to live with and love forever is spectacular. But what happens when that person dies? Robb Reilly experiences this all too well. Being left in a world where he has to care for nine sons without a partner is a hard job, but one he revels in, one he loves. But he cannot cook to save his life.

Seeing an advertisement for a chef wanted in a vampire coven, Smith Reed instantly wants it. It is as though his gut is telling him to get the job. Of course, when he arrives he is in for more than he imagined.

A sexy-as-sin vampire whom he thought to be straight is now his mate. Not a chosen mate. Instead, Robb is his fated mate, the person he was created for. It's a phenomenon that hasn't occurred in over a thousand years. And Smith is lucky enough to have one.

But when trouble comes, can being fated by blood save the two mates or not? 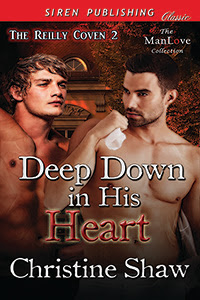 Saxton Reilly watched the love his father found in a true, fated-by-blood mate. His stepfather, Smith, makes the man different. Happier perhaps. Saxton wants nothing more than to have a relationship like that

When he comes home from business he finds a strange man in his house. One intending on redecorating the kitchen and extending it out. Saxton doesn't know much, but what he does know is that when he gets closer to the man, he smells mate. He scents exactly what his father and Smith told him he would—the most amazing thing that equals a mate in his mind.

Full of lust, the two get to know each other, fucking all over the huge mansion of a place. But what happens when Greg Palmer starts desiring more? The man doesn't know about vampires, so what's a man to do when faced with such a situation?

And when the truth finally comes out, will Greg accept his fate or not? And will Saxton get to claim his mate after all?

So I read the blurb for Deep Down In His Heart and thought this would be a standalone type of book even if it were labelled Book 2 of the Reilly Coven series and then proceeded to read. By the fifth or 6th page, I knew I was lost. Yes, there were some backstory but somehow they came out vague and jumpy and I thought, "why not read the first installment?" So I did. I read the blurb of Fated By Blood and thought it just as interesting. So I go to bed and settled in early to enjoy these two interesting reads. A few minutes into the first book, I started smiling, then laughing then just plain gave myself up to the story.

Okay, so here are my thoughts. Mind you, despite the low rating I gave, I will still read this series. I have it on my Light Reads and Fluffies Collection in my Kindle right now so do read on without trepidation.

Fated By Blood was one of the lightest reads. Ever. It was like reading this Beginners' Guide To Fantasy/Paranormal MM. The language was very basic, the writing style was very simple. The plot and characters did develop to a certain degree and there were some really kick-ass moments. However, for those who are picky, they may find this book a jumper. The ideas jump from one to the next then back then to the other next then back then all over the place. Eventually they do make sense but only after wracking your brain for trying to make the ideas merge into one cohesive idea. It was kinda confusing in an elementary way but in the end it was an HEA so all was good.

Deep Down In His Heart was a little confusing. Hehehehehhehehehe.

Okay, I am writing this with a stupid smile on my face.

This one was different from the first book. Yes, it was more confusing, there were times I literally had to go back to the earlier chapters to make sure I was reading right, there were times when I found myself cranking my brain cells to work overtime for I was reading one thing but was getting a totally different image. No, I am not saying that I was getting mixed messages. This is a situation where I was literally reading one thing but the mental image was totally different. It was like watching English dubbed Chinese movies wherein the dubbed voices had stopped talking but the actors were still silently speaking. Hahahhaahhahaha, it was sooooo weird and funny.

Did all this stop me from reading this series?

Frankly, NO! I was so entertained by the whole writing style that I got hooked. I am actually still laughing while writing this. This was a work that is in serious need of a good editor but the stories were silly and entertaining and made no sense whatsoever that I just got hooked.

Am I confusing you readers? Well, I am confused myself. Curiously, seriously, I am in no way frustrated or peeved or whatever. I am just plain entertained and I will make sure to follow this series.

Okay, so I'll change my rating. I will place each on a 3 Stars for the entertainment factors. I totally enjoyed myself, hehehehhehe.

Posted by multitaskingmomma at 8:00 PM