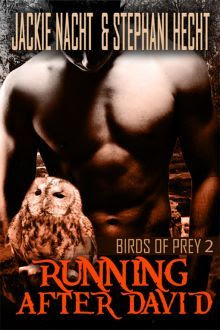 You can run, but you can never hide from the evil that hunts you in the night.

Ever since David learned about the war between the Birds of Prey and Blood Demons, he has longed for the Birds of Prey leader, Night. When the warrior rejects him, David leaves to forget the world he was thrust into. Night was created for one purpose, to fight in a war between good and evil. When his Goddess Athena gives him the gift of a mate, Night doesn’t know how to care for the man meant for him. Will Night learn how to love the David, and will he get to him in time to protect him?

Going After David is the second book to the Birds of Prey series. When I first read that first book back in May, I was not that surprised with the way the details of the story was reading. This is very, very, loosely based on Greek mythology, particularly Athena, the Goddess of wisdom, war, the arts, industry, justice and skill. She is known to have had a familiar in the form of an owl, those wise but very lethal birds of prey. She transforms her owls into man-formed warriors who then are made to train her later transformations. In the process, she makes sure they each have male mates for eternity while the warriors are faced with dangers untold. Danger is drawn into the presence of these male mates and the warrior mates are faced with a war and protecting their more sensitive and vulnerable eternal partners. Athena is, in the meantime, guiding them physically and spiritually and acting like a totally typical American feisty woman who speaks slang and leaves no doubt in my mind she lost her wisdom somewhere in translation.

Quite a formulaic story in my opinion so I was quite curious as to why this seemingly no-brainer book was rated high. So the question is, why did I bother to read this second one? The answer is quite simple: curiosity is my downfall and I convinced myself this second book would fare much better.

It turns out this second book is frustratingly formulaic, much like the first one. So I will just stop my review here.

Posted by multitaskingmomma at 9:02 AM