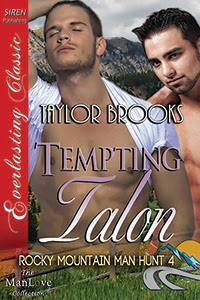 Doctor Jace Atkins leaves a successful medical career behind to open his own private practice. Looking for something different out of life, he hopes to find a small town to settle into. His wish is granted when he moves into the serene and peaceful town of Absarokee, Montana.

Talon Hart is a local fisherman and native to Absarokee. Known by many as the town’s resident smart-ass, he also is a hard worker who prides himself on earning his keep. He’s a man who lives life to the fullest and never takes a single moment for granted.

When Jace and Talon meet, they couldn’t be more different. An instant connection brings the two together, and they soon learn that opposites really do attract. Just as their relationship grows and they settle into one another’s lives, an unknown danger threatens to tear them apart and all they hold dear.

Tempting Talon is the fourth book of the Rocky Mountain Man Hunt Series which tracks the moves and murders of a psychopath and his accomplice girlfriend who reminds me somewhat of Sharon Lesher (Profiler Season 2 played by Traci Lords). This is one sick couple who just sashays their way to a killing spree driving the FBI agents into a tizzy. As for Jerry, well he has shades of Kyle Boone (NCIS Database) or at least a part of his psyche is.

Caught in the midst of this serial killing spree are Talon and Jace. Their romance are an aside within the arc of this story, just like the other men of the series but that said, there is no putting down their romance which is sizzling HOT! And yes,  just like the other books, the evil psycho and bitch on the side escape arrest once more and that revelation means more books to this series.

The Rocky Mountain Man Hunt Series is well done and it has shades of similar plots like Profiler and NCIS Database as I had mentioned before. The character development of the serial killer is just as well done, albeit a bit like a soap opera. The visuals of their stalking is brilliantly graphic so is bloody gory, I must say, and I did not notice until a while later that my heartrate had risen considerably. The escape was a bit of a let down but then again, how are we to expect more from this series if they are caught? Then we won't get to enjoy more of this series.

Will definitely be on the lookout for the rest of the installments of this series. And in case no on noticed, I was raving on the serial killer characters not the two main characters :P

Posted by multitaskingmomma at 11:19 PM