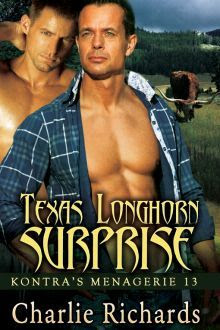 
On the Road: To combine two lives, first one must understand the components of each.

When Ryan Carpenter realizes the scientists he works for are torturing sentient beings, he feels the need for penance in the form of helping the shifters free their comrades. To that end, Ryan heads to Oregon to offer aide in shutting down one of the scientist’s training facilities and freeing any captive shifters. He’s unprepared for one of the men, Sam Abbott, a Texas longhorn bull shifter, to express an attraction to him. Unfortunately, Ryan has secrets of his own, and knows if he becomes involved with Sam, a shifter, his own transgressions against Sam’s kind would eventually come out, destroying anything they might have built. Walking away—especially for the good of everyone—should be easy, right?

One of my secret indulgences, Kontra's Menagerie is a series I read when I am in the mood for some fluffy, easy, no-brainer, romantic stories with some mating on the side. Texas Longhorn Surprise is the 13th installment to this series and just as the title suggests, it is filled with a menagerie of shifter breeds. Some of them have human mates and Ryan Carpenter is one, but he is enhanced. I also follow the Wolves of Stoneridge where the enhancement of some human soldiers to get them stronger against shifters is explained. What I like about these types of books is that even if one were to skip on one or two, the stories have enough of a backstory to help the lost gain ground.

This installment is unique though. Here, we actually see a character development in Ryan and Sam. The plot does not really develop all that well in terms of their fight against the scientists, but the relationship between these two main characters is better written compared to the earlier installments. This was a really nice surprise, especially as there was none of the wasted smexy scenes that I learned to fast forward through to get to the nitty gritty of the relationship developing.

This was a fast and short read in my case but it was not frustrating in the least. It was actually very romantic and practical. There was an actual growth to the characters and I especially liked Ms. Richards allowing these two men to really get to know one another and communicate rather than just jump into the mating heat and writggle their way into the sheets.

So yes, this is definitely a good installment, much more so compared to the other earlier ones. At the end, I was smiling and feeling goofy. So yeah, it is a feel-good book. Hence the good rating.