Review: To Kiss a Killer (Banded Brothers #5) by Amber Kell 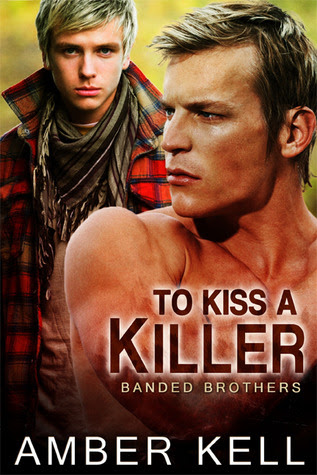 To Kiss a Killer (Banded Brothers #5)

What would you do to protect your family? For Aden the answer is anything.

Aden Gale has always protected the boys he chose as his. Gallen Theos refuses to become another one of Aden’s projects. He might have been bespelled by his father but he was Aden’s mate and he refused to take anything less than a full partnership. If the cool-eyed killer thought he could wiggle away for Gallen’s own safety, well he had a lot to learn about the tenacity of sorcerers.

I have always liked this series, especially when Aden drops by to check in on his boys. It was a nice surprise to see that the fifth of the series is about him and that he gets his own mate, Gallen. I was honestly looking forward to this nice surprise so imagine my dismay when I read this.

Okay, to set the record straight, this is not a great book, but neither is it one that could rate a 1 or a 2. This reads very well, there were quite a few typos here and there but those were no biggies and there seemed to be a lot of stuff going on. I could not rate this a 4 but its plot has made my curiosity meter beep.

There is an introduction to dragons here. They just appeared out of the blue, apparently with no explanation. It does not help any, either,  that the mating tattoo is in the form of this ancient creature. The mating of Aden and Gallen took to the sidelines when these dragons popped up out of the blue and I honestly had a ranting and raving session when I read these words at the end:

"Stay tuned for the spin off
series, Dragons of Seattle,
with more of Aden and Gallen
and the rest of the Bonded Brothers."

That these words at the very end of this book irritated quite a few readers, I understand. My reaction was better, I should say, when I saw these words I just got plain excited and I saw this book as more of a Prelude for this new spin off Amber Kell is creating instead of the Finale to the Banded Brothers Series.

(I need to ask: why is it that the series is called the Banded Brothers while this ending says it's the Bonded Brothers? I don't get it.)

I do get the irritation. I do understand why others would see this as unfinished or rushed. I see it differently, I guess. I see it as an interesting way to assure us readers that we have not seen the end of this favorite Fatherly character in Aden. Neither is this the end of Gallen. I see something bigger for these two men. With things left unresolved in To Kiss A Killer, I am now honestly looking forward to reading the next chapter in their lives. And the kids'.
Posted by multitaskingmomma at 12:06 AM