Review: The Trouble With Tony (Sex in Seattle #1) by Eli Easton 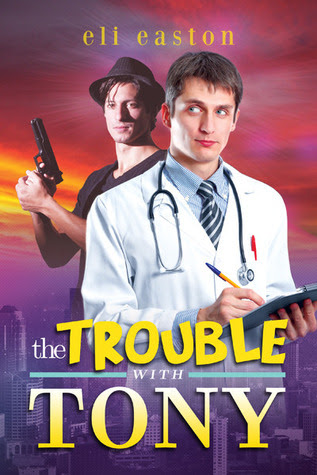 As part of the investigation into the murder of a young woman, Seattle P.I. Tony DeMarco poses as a patient of Dr. Jack Halloran, the therapist who treated the victim at a Seattle sex clinic. This isn’t the first time Tony has gone undercover, but it’s the first time he’s wanted to go under cover with one of his suspects. He can’t help it—Jack Halloran is just the kind of steely-eyed hero Tony goes for. But he’ll have to prove Halloran’s innocence and keep the doctor from finding out about his ruse before he can play Romeo.

Dr. Halloran has his own issues, including a damaged right arm sustained in the line of duty as a combat surgeon in Iraq and the PTSD that followed. He’s confused to find himself attracted to a new patient, the big, funny Italian with the puppy-dog eyes, and Tony’s humor slips right past Jack’s defenses, making him feel things he thought long buried. But can the doctor and the P.I. find a path to romance despite the secrets between them?

It is quite rare for me to go to the internet for some clarification because I was totally confused about terms written in a book. In The Trouble With Tony, I met one slang term and a medical term I was totally unfamiliar with and I had to go out of my way and do some little bit of searching. Great thing Google, it has all the answers at the tip of the fingers. So, here are those two terms:

Picky Dick or Dick-Picky definition: [1]*To be picky or choosy about what type of penises also known as dicks you prefer or want.  [2]*One who has obnoxious preferences to different things, especially male genitals. [3]*Demisexual.

Demisexual definition: a person who does not experience sexual attraction unless they form a strong emotional connection with someone. It's more commonly seen in but by no means confined to romantic relationships. The term demisexual comes from the orientation being "halfway between" sexual and asexual. Nevertheless, this term does not mean that demisexuals have an incomplete or half-sexuality, nor does it mean that sexual attraction without emotional connection is required for a complete sexuality. In general, demisexuals are not sexually attracted to anyone of any gender; however, when a demisexual is emotionally connected to someone else (whether the feelings are romantic love or deep friendship), the demisexual experiences sexual attraction and desire, but only towards the specific partner or partners.

Now that that has been cleared up, let us just say that this one one hilarious read and I was honestly disappointed when it ended. This book has all of the things I love in an MM light read: romance, sexy men, a little bit of erotica, some mystery, some machoness which can be unmanned by a simple and hilarious prostate exam that triggered me to laugh out loud thus prompting my hubby to snatch the Kindle off my hand and read what made me laugh. Of course, there was a bit of a struggle after this to regain my bearings but then again, the gigles never stopped until the very end.

***Just a thought: whatever prompted author Eli Easton to write about this particular topic? Well, no matter what her reasons may be, Thank You! I had a great laugh!

Posted by multitaskingmomma at 3:12 AM