Review: Weight of Silence (Cost of Repairs #3) by A.M. Arthur 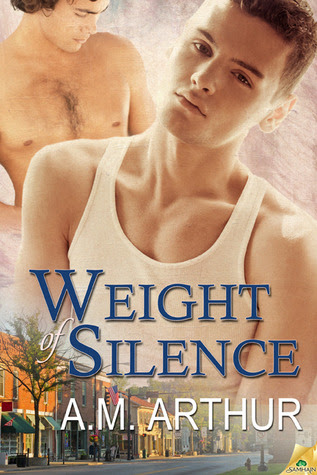 Weight of Silence (Cost of Repairs #3)

The wrong secret can poison everything--even if it’s kept with the best of intentions.

Gavin Perez knows he’s a living cliché. He works a dead-end job, shares a trailer with his waitress mom, has an abusive, absentee sperm donor, and he’s poor. So color him shocked when middle-class, white-bread Jace Ramsey agrees to hang out with him.

Granted, Gavin is trying to make up for dumping a bowl of cranberry sauce on Jace at Thanksgiving. And boy, is Gavin forgiven, over and over again…until Jace goes back to college for finals and stops returning Gavin’s calls.

Back home from the semester from hell, Jace doesn’t want to do anything but sleep through the holidays. It’s easier than coming out to his family—or facing Gavin’s hurt. But Gavin’s ready forgiveness draws them back together, and Jace won’t be able to stay in the closet much longer.

Nor will he be able to keep hiding his pain. He trusts Gavin with his body, maybe even with his heart. But can he trust that a devastating secret that’s eating him up inside won’t destroy everything—and everyone—he loves?

Warning: This book contains one slightly hyperactive hero from the wrong side of town, a frustrated college student looking for a little life experience, and an unexpected romance amid dark secrets that just won’t stay buried. Also contains references to physical abuse some readers may find disturbing.

When I read Weight of Silence, the title was telling me that there are secrets here that may just be too much for comfort. Both for the reader and the main character. The secret here is weighty, and despite many misconceptions, this type of secret is destructive.

I won't reveal any spoilers, this will ruin the whole silent affair. What I will say is that A.M. Arthur dealt with the issue at hand in the most realistic way possible. Secrets like these can lead to misplaced guilt, paranoia and without the right support system, can lead to self-destructive behaviors which can be fatal and depressing at best. Yes, at best.

The best thing that ever happened to Jace was Gavin. Yes, Gavin is from the other side of the tracks but his is a life that may be poor in material things but rich in support group. His mother, friends and the whole community itself was his support system, a system that Jace, in his young and immature mind, did not think would ever exist for him.

This was not the light reading that I expected. This was an emotional journey which was very identifiable. Yes, for those readers who are more mature, it was quite frustrating for Jace to act the way he did, but think about it: he was just 19 years old. Yes, many would say this is old enough or mature enough, but it is not! He may be physically "mature" but he comes from a very loving and protective family that never had to deal with this type of situation so it is logical that he could not deal with his secret in a practical sense. Getting into a relationship with Gavin was probably the best thing to ever happen to him, even if in the future their relationship will not work out. This has a HFN ending, but it has a beautiful light at the end of that tunnel. The resolution to the secret was a long time coming but it was dealt with beautifully.

If I have to complain about something, it would be that this book ended where it did. I wanted more from this story, more as in more chapters, more romance, more loving, just MORE of the story. This was just too short for me, although this was not a short read or a short novellette either.

Note: Weight of Silence is the third installment to Cost of Repairs Series, a series which I have just completed purchasing as I honestly have not read the first two books. With the way this series is written, each book can stand on its own, and getting backstories is no problem as these were well written in and integrated.
Posted by multitaskingmomma at 9:18 PM