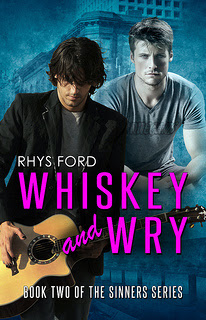 He was dead. And it was murder most foul. If erasing a man’s existence could even be called murder.

When Damien Mitchell wakes, he finds himself without a life or a name. The Montana asylum’s doctors tell him he’s delusional and his memories are all lies: he’s really Stephen Thompson, and he’d gone over the edge, obsessing about a rock star who died in a fiery crash. His chance to escape back to his own life comes when his prison burns, but a gunman is waiting for him, determined that neither Stephen Thompson nor Damien Mitchell will escape.

With the assassin on his tail, Damien flees to the City by the Bay, but keeping a low profile is the only way he’ll survive as he searches San Francisco for his best friend, Miki St. John. Falling back on what kept him fed before he made it big, Damien sings for his supper outside Finnegan’s, an Irish pub on the pier, and he soon falls in with the owner, Sionn Murphy. Damien doesn’t need a complication like Sionn, and to make matters worse, the gunman—who doesn’t mind going through Sionn or anyone else if that’s what it takes kill Damien—shows up to finish what he started.

I am really a sucker for good great looking guys on the covers and with titles that jump right at me. Whiskey and Wry is a title that immediately got the song American Pie going on in my head. Funny that this title brought back the song 'cos it just kept playing in my mind the whole time I was reading this - and I was reading this over two days because of a very busy schedule. That said, I found out along the way that this was the second book, so that just goes to show how "out of it" I was these past days.

Back to Damien and Sionn, their relationship is written in much the same manner as any MM romance out there. They were goofy with each other and kind of sucked deep into each others' psyche. By the end of the book, no one was letting go of the other in the near or far future so we are assured of a beautiful HEA. They were not sweet either, the author showed all their faults and weaknesses as well as their good sides so it is not going to be surprising if not all readers would like these two men. Damien is a survivor and what he went through and was still going through was an opportunity to make him into a clingy, whinging guy. Thankfully, Ms Ford did not and instead made him stronger, albeit a bit confused as a result of his injuries.

It is the author's approach to the side stories that really sucked me in deep into the story. I knew the romance was going to happen, it was a given, but Rhys Ford started on Parker, the really evil, pathological, psychotic assassin who was out to kill on a whim, on a desire and on the orders of a boss. His character really drove me to read on this story. He was just so darned intriguing from his illogical logic, his needs and his actions, to his experiments and his eventual downfall - this was just a brilliant rendition of an assassin all readers love to hate but could not reject.

Ms. Ford also managed to turn this into a true-blue action-packed novel so those readers like myself who like a bit of action that is not cheesy corny and more like a well choreographed action sequence sans the hidden dragon are sure to be quite satisfied.  There were some descriptive text here that literally set the pads of my feet tingling all the way to the hips at the imagined insult to the flesh so that upped the rating for me even more.

The fact that this is the second book makes no difference, it does not harm it either. This book stands well on its own digital back. The backstory is well written in so I did not lose direction at any time. This book does tell me that I should read about Miki and Kane of Sinner's Gin (Sinners #1) and make sure to keep track of the third book so teasingly revealed at the very end of this one. That should be about Connor and Forest (a mystery so far) which should give us a preview of the fourth and final book that should eventually build up the band once more. Does the fourth book involve Rafe by any chance? He is a bassist after all so should play a great role in the fourth installment. Can't wait!

Note: Going to read book 1 now! Yay! But don't ask me when I can finish it, I hope within the weekend as my schedule is simply sucking up my reading time :( multitasking is too multi at times and very tasking!