A Daring Ride (The Bullriders #2) by Andrew Grey 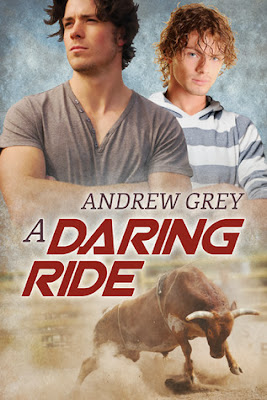 Simon “Frizz” Frizzell sneaks away to the rodeo on weekends, and it’s not until after he wins a buckle that he tells his parents about his bull-riding. He knows they won’t approve of his choice of sport, but his parents own a Christian bookstore, and he couldn’t possibly tell them the whole truth: he’s gay. And so are some of his rodeo friends, like Dante and Ryan, and Jacky—a young man he wishes could have been more than a one-night stand. When Simon sets his sights on his dreams, he finds work with Dante and Ryan, and bumps into Jacky on the job.

Jacky Douglas is a rodeo fanatic, plain and simple. He loves the ride, and he loves the cowboys. He fell hard for Frizz when they met, and theirs was a one-night stand made in heaven. When they meet again, Jacky thinks it’s a stroke of luck. Frizz takes some convincing, but once he’s on board, they begin a relationship. The fledgling romance faces a challenge when news of it travels all the way to the one place Frizz doesn’t want it to go: his parents’ bookstore.

I simply love reading about these Bullriders, especially as the story of Dante and Ryan continues on to this second installment, A Daring Ride. This one features Ryan's best friend, Jacky, who I learned to like in that first book. Here he is just the same Jacky, a devil-may-care kind of guy who has a soft spot for anything in chaps and rides bulls. He meets Simon, an up-and-coming young bull rider who fate drops on their table at a bar when no other seats were available. Sparks fly between Jacky and Simon although for the latter, it was innocent as he really was an innocent gay man.

Simon is a sweet guy who was lovingly raised by conservative parents and who loves his younger siblings to the point of becoming a second father. He knows just how to take care of them, he knows how to deal with them and despite the age differences, he is best friends with all of them. What no one in the family knows is that Simon has been hiding a secret and feeling guilty about said secret for a long, long time.

After finally convincing his parents his need to bull ride, he goes off to work for Dante and Ryan and in the process, gets to know Jacky, his bosses and himself. It is at this ranch that Simon finally gets to come into terms with who he really was. The romance with Jacky is rekindled, finally flaring and they fall in love. However, there is still the problem of his parents.

The romance between Simon and Jacky was a great read for here we have an innocent and a hound dog who find each other and ultimately teach each other their ways to accepting each other. I loved how their personalities grew, too. Initially, Jacky was a flighty guy and Simon was too rigid in his conservativeness. As the reading progressed, so did their emotional growth, their personalities improved and their characters grew into mature men.

The whole book does not have the feel of the first one, A Wild Ride. That book was more  passionate. This was also  fierce, but in a totally different way. For one thing, the men concerned are not as intense in personality as Dante, nor for that matter, Ryan. So the feel of this one is much lighter, which made this into a light read for me.

If there is one thing I have to be nitty-picky on, it was the lack of resolution of the one problem that kept popping up in the book: the court case between Simon's father and his former manager whom he fired because of his homosexuality but cooked up another reason to protect himself from legal problems. Of course, this problem affected the father's reaction when his son came out or was outted by a stranger and it set the course to his almost losing his son. This legal problem was left hanging and unresolved.

Having said that, this gives me an idea that this former manager will have a role in the up and coming book 3 of The Bullriders. Somehow, Andrew Grey has this tendency to give us a glimpse of what is next to come without really being blatant about it. This one, unresolved issue may irritate or frustrate some readers but not me. I feel I know this writer by now in terms of writing style and I am honestly looking forward to how that 'hanging plot' and mysterious character would play out. If I am wrong, oh well, no worries. I still loved this book. It was a light read despite the drama.


Posted by multitaskingmomma at 11:22 PM