Advance Review: The Barman and the SEAL (Ellery Mountain #6) by R.J. Scott 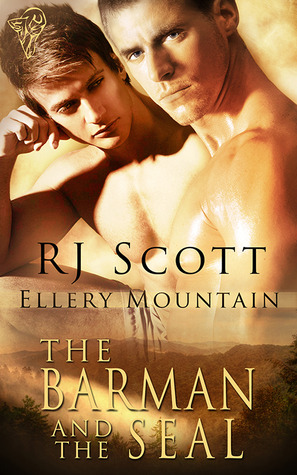 The Barman and the SEAL (Ellery Mountain #6)

A Navy SEAL with PTSD, a Barman starting a new life. Maybe they can find love in Ellery.

Travis Baranski, Navy SEAL, is the first veteran to attend the Ellery Mountain Veteran Center. He is having a hard time coming to terms with what he had seen and what he has done. When he has a very public meltdown in Ellery stores it is Avery Gideon who steps up to the plate and helps him.

Avery Gideon, a man cut off from his family for being gay, runs the only bar in town - The Alibi - and listens to many a person's problems whilst trying to forget his own.

He sees something in the wounded warrior who needs a friend and very soon finds himself falling in love with Travis.

Nothing will deter him from helping Travis, or from making Travis see he's still capable of loving Avery in return.

Total-E-Bound was offering this on special, so of course, I could not resist. I wanted to know what happens next, especially as the work of Daniel is finally going full out, helping those warriors back to sane life and civilization.

Avery has been mentioned time and again in the Ellery Mountain Series but no one really knew who he was. Apparently, he has his own set of personal angsts, no thanks to a bigotted father whose political practices were questionable at best. He is making a new life for himself in Ellery when he meets Travis, the first of the soldiers to be helped in the Center. It was not a good start, but it was a profound one for both of them. So their story and romance begins.

What I really liked about this story is there was absolutely no rush to the relationship. They both took it slowly, the author took time to get the healing in before the sex complicated things, both men took time to get to know each other, to relax into each others' company, and Avery even went through the very important partner-therapy so he does not get lost in the oblivion of a PTSD sufferer.

Although many would say that things were a bit too slow, I really appreciated it. In real life, it would be much slower and much more complicated and more angst to be frank about it. Not many PTSD sufferers will actually get to the point Travis reached. This is a romance novel after all, so it is only right that things are taken slow, carefully and meticulously. There were some glossed over stuff here that in real life would not be advisable, but that is the point we all love fiction, right? In fiction, anything goes and the author can take the artistic route.

Compared to the first five Ellery Mountain books, this was probably the darkest and most emotional. There were times when it was quite hard to digest what Travis had to go through. However, I see this as the beginning of the turn in this arc, when the Center finally gets to help those who need it most and plays a larger role. This means we will be getting more serious and complicated characters where in the beginning, we got the ordinary guys who had some problems but nothing as bad as those who will come into or out of the Center.

This is a great sixth book for the series and I am glad to be following it.
Posted by multitaskingmomma at 10:16 PM