Review: Fire from Heaven (Alexander the Great #1) by Mary Renault 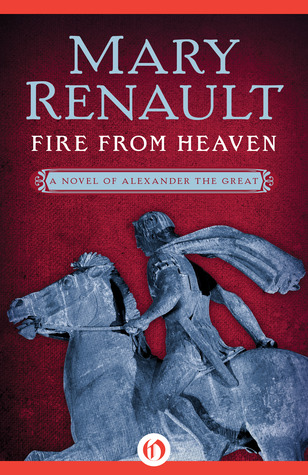 Alexander the Great stands alone as a leader and strategist, and Fire from Heaven is Mary Renault’s unsurpassed dramatization of the formative years of his life. His parents fight for their precocious son’s love: On one side, his volatile father, Philip, and on the other, his overbearing mother, Olympias. The story tells of the conqueror’s two great bonds—to his horse, Oxhead, and to his dearest friend and eventual lover, Hephaistion—and of the army he commands when he is barely an adult.

Coming of age during the battles for southern Greece, Alexander the Great appears in all of his colors—as the man who first takes someone’s life at age twelve and who swiftly eliminates his rivals as soon as he comes to power—and emerges as a captivating, complex, larger-than-life figure.

Fire from Heaven is the first volume of the Novels of Alexander the Great trilogy, which continues with The Persian Boy and Funeral Games.

***This ebook features an illustrated biography of Mary Renault including rare images of the author.

After reading the blurb that this novel was based on the life of Alexander the Great, I was excited to begin and thankfully, it did not at all disappoint.  After just a few pages, I see why it's rumored to be the basis for "Alexander" the movie and I subscribe to that theory totally.

To begin with, the method used to write this story is completely riveting.  I found myself flipping effortlessly through the pages, while thankfully remembering Greek terms learned in earlier years.

Mary Renault created such a terrific painting of what could have happened to drive this sad and morbidly ambitious man to go to such lengths to prove himself worthy of being considered a god. Little details are sprinkled throughout that give a preview of the type of tyrant he would be later on. You can't help but wonder if there is a smidgen of truth in what Mary Renault had put on paper.

Early on is described the first battle Alexander led. Herakles (who he believed was his ascendant) guides him and he wins, of course. But what stands out for me is how Herakles explains life and his feelings on death to him: "Man's immortality is not to live forever, for that wish is born of fear. Each moment free from fear makes man immortal." Now that, to me, explains why Alexander the Great is remembered to this day.

What I love most about Mary Renault's writing is that I can see the spirit of Tolkien hovering in the background.  How wonderful that she had such a great mentor and was so influenced by his teaching! She was able to inherit his gift of creating a piece of moving scenery in the reader's mind and flawlessly apply it to her own imaginings.

This is a novel that should be recommended reading, not of course for its historical value, but to allow the younger generation to recognize that there is still material available that is not mindless pap.