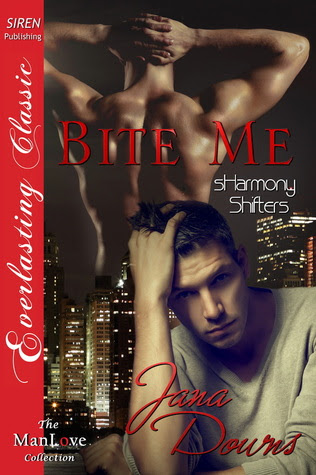 Jude Lawson has bad luck in love. When his friend stumbles upon a matchmaking service promising to pair him with the shifter of his dreams, he isn't entirely convinced. Little does he know that his first match will be the man destined to change his bad luck forever.

Logan Carter is a fox shifter who is looking for a second chance. Since adopting his younger brother after their parents’ death he’s not had much luck with relationships. Deciding to date a human might be a bit of a culture shock but it has to be better than not dating at all. Taking it slow might have been his plan but one glance at Jude shows him he wants anything but.

As jealous exes and hate groups try to drive a wedge in their newfound relationship, Logan and Jude will have to decide if staying together is worth whatever price they have to pay in order to find happiness.

I really thought this was going to be one of those serious plot books basing my opinion on the blurb, but once I read this, I found that it is a light romantic read. Yes, there were the usual antagonists and conflicts coming in from external forces but they were very lightly done and not overly dramatic. This is great, in my opinion, for this made it a good light read to take my morning coffee with.

The romance between Logan and Jude was the usual formula of shape-shifter mating but there were none of the usual and formulaic angsts involved and they both took their time to get to know each other, find out if they were compatible or not and all the other twenty questions courtship usually goes through. Yes, there was the mating cry of mine but that was as far as it goes. It was more like an instinctual cry and was thankfully none of those over-dramatic cries we usually meet in paranormal-shape-shifter stories. This upped the rating for me.

What brought down the rating from a 4 stars to a 3.5 were really just two things: [1] the editing needed a little bit of work for there were some grammatical errors as well as typos that could have been swept cleaner; and [2] the lack of a backstory that explains how the shifter virus was discovered, neither was there anything if this was a normal part of this alternate world or even a history. This second thing is actually what prompted me to drop the rating a notch for I feel that if this backstory had more grit to it, the story would have worked out better.

Those said, I was very happy with this new series by author Jana Downs. I am certain to follow this one for this will take me away from the angsts of the day or even week. This is a fluffy, romantic, light read that makes me smile in a goofy way. I can't wait for Jude's two friends to find their happily ever afters.
Posted by multitaskingmomma at 10:04 PM