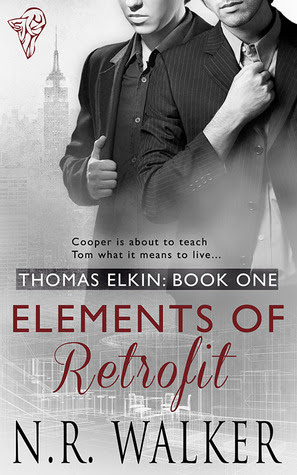 Book one in the Thomas Elkin series.

Even the strongest of buildings start out as plans on paper, and every architect knows that sometimes plans need to change. Sometimes, these lessons are learned on the job.

A successful New York architect, Thomas Elkin almost has it all. Coming out as gay and ending his marriage before his fortieth birthday, he needed to start living his life. Now, four years later, with his relationship with his son back on track, and after a few short-lived romances, this esteemed traditional draftsman thought he knew everything about architecture, about life.

Cooper Jones, twenty-two years old, is about to take the architect world by storm. Talented, professional, driven, and completely infuriating, Cooper is the definition of Generation Y.

This was another TEB special offer and there are absolutely no regrets. This was an absolute delight to read.

Yes, as the blurb suggests, this is another of those older/younger man relationships that is bound to have some deep drama involved all pointing to the difficulties of age gap issues. Well, Elements of Retrofit does have the drama but not enough to turn anyone off.

I love these types of romances. I like to find out how the authors would treat the whole relationship aspect and most times I get disappointed when the drama just plain overwhelms what could have been a great story. I love the way N.R. Walker treated this one. It was a light read, surprisingly, it was easy on the emotions and the drama was hilarious.

Okay, so Cooper is Tom's son's best friend and this could have given the author a chance to get into some emo drama but she did not. Instead, we get a hilarious situation involving a brown paper bag and a younger Cooper giving the father and son some mature lecture that totally surprised me. Apparently, Cooper is very mature and insightful for his young age. I also loved the way Thomas twisted things around so their love affair would not ruin Cooper's chances of a brilliant career. Of course this was met with some bit of drama but it all panned out in the end.

Now this book had a lot of tsk tsk moments, some not so ethical, some not so allowed in a professional situation, but the author dealt with the situation with such finesse it may be tempting for some who have read this to try it out in real life. hehehehhee We need to remember that this is fiction and anything goes! Ha!

Long and short, I loved this book. I loved the relationship developing between these two men but I am anxious about the second book. I hope it does not turn into something uber-drama and emo and I so want these two men to have a great HEA as right now they are in an HFN moment.

Note: I went and checked out Ms. Walker's blog for the Thomas Elkin Series and found the pics for these two men. Now that is what you call: OOMPH! Totally meant to be.
Posted by multitaskingmomma at 1:07 AM