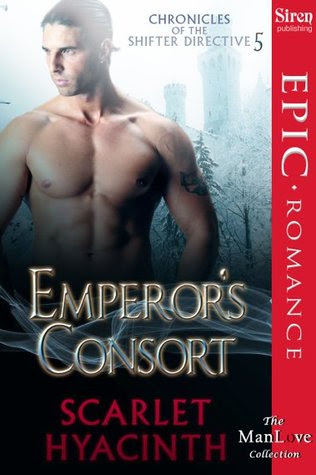 My Rating: 5 of 5 Stars - Once Again I applaud Ms. Hyacinth

Ice dragon Hareem Tersain was born to lead the draechen empire. He thought nothing could become more important to him than Ornoz. He was wrong.

When his path crosses that of one beautiful werewolf, Hareem is torn between love and duty. For Hareem, Taryn Lovington, his mate, is perfect. But their bond is taboo. Other draechen would never accept a ninth caste member as an emperor’s consort and a werewolf’s child as an heir. Trying to protect Taryn, Hareem sends him away.

He doesn’t realize his foes know about his connection with Taryn. When Taryn is attacked by vampires, a chain of events is set into motion that reveals an unexpected enemy. Forced into unlikely alliances, cornered by the selfish desires of others, Hareem has to build a safer world, one where he and Taryn would be free to love each other. Will he succeed in this daunting task or will he pay the ultimate price for making the attempt?

Scarlet Hyacinth continues to astound me. She has raised the bar for her Chronicles of the Shifter Directive Series to a much higher level and she still has two more books of the arc to go. Will she be able to keep this up? I think so. I feel it. Looking over her past works in this series, she seriously placed some great thought into the development over both the plot and the different major and minor characters involved that it is now impossible for me to expect nothing less than fantasy spectacular from her.

Emperor's Consort is the story of Hareem and Taryn, the emperor and his werewolf mate we first met way back in the first book, Werewolf's Way. Everyone, both readers and characters alike, knew what was going on between them but never were we privy to what actually went on. There was even a time when I considered Hareem a cowardly prince, then a cowardly emperor who did not seem to do anything right when it came to his relationship with his mate. Then in Naga's Concubine, he stupidly sends him away and I totally hated him for it, breaking Taryn's heart and thereby reaffirming my dislike for him.

Then the Shadow came and readers did not know which was more important: the Shifter Directive or this new and unknown enemy that could destroy everything and everyone in its path.

At first, I figured that there was absolutely no clue as to what this shadow was but going back and reviewing the previous four books, I saw that Ms. Hyacinth did leave the clues out in the open. It was just that these clues were so blatantly out there they ended getting obscurred by the other things going on. When I finally found out who or what this was, clearly I was astounded and wondered how this was going to play out.

Rachen's role has stepped up, as promised by the author. His role as the absorbed and then the reborn twin of Prince Karein should have clued us in that if he can be reborn along with the princes of old Kael and Tali, why not something that had been scrupulously lurking in the background be reborn as well?

As for Hareem and Taryn, readers now know what was going on, what drove the emperor to go down the seemingly stupid and cowardly path. Him being an emperor was a mantle he could barely handle, what with a pregnant, low caste wolf shifter for a mate who was expected to take on one of the most important roles in the draechen world: the Consort. It was apparent that Taryn was not going to be accepted and the fact that the consort is just second in power to the emperor, there were fears unmentionable. Hareem got caught between the mating and the brick wall and had no obvious way out.

Well Hareem found the way out and it was a brilliant but questionable plan. How this plan will play out in the succeeding books will have all readers and fans waiting impatiently. What is important is the (supposed) destruction of the shadow foe.

I still am not quite satisfied with that destruction. Ms. Hyacinth left some clues out there again that brought me back to how the book Sorcerer's Stone ended. And then there was the question of Alwyn: what or who is he? We know he is Rachen's mate, but after what power he just displayed, this tempts me to revisit the Chronicles of the Shifter Directive Companion Guide  for that next book's blurb. I will not be tempted, I should not be, but you all know I will be.

Note: this was an exhausting book to read. Not only was there a lot going on, this was extremely fast paced and the heat level of SCORCHING is too tame a heat level. So yeah, EXHAUSTING!

Posted by multitaskingmomma at 1:06 AM