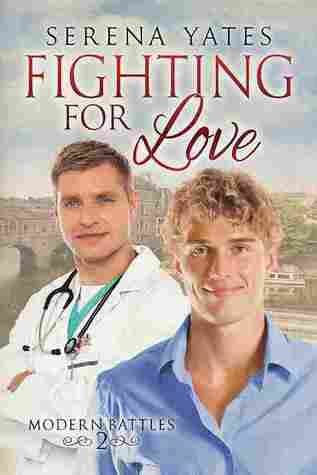 
Danny McBrae is a super-rich playboy, but his devil-may-care lifestyle hides an artist with a sensitive heart who gave up on love after years of hurt. When his beloved great-grandfather, the eccentric Sir Malcolm Witherspoon, dies and leaves a rare piece of land to Oxford Hospital Trust, Danny finds new purpose. He uses some of his inherited wealth to help finance the planned children's hospital, supporting his best friend, Dr. Grayson Burrows, who heads the project team.

When Grayson is seriously injured, Danny meets Dr. Halldor Magnusson, the neurologist who treats Grayson. Halldor has some weird ideas about keeping Grayson away from James, his lover, so Danny initially dislikes him. But Halldor also has his own, deeply personal reasons for wanting the children's hospital to become a reality, and the initial mutual distrust changes into interest and attraction. When Danny’s jealous ex-lover attempts to tear them apart and someone is trying to get Halldor removed from the project team, they decide to join forces so they can win the battle.

Neither of the men is looking for love. Yet they discover it may be worth fighting for.

I absolutely love stories where at least one main character is a doctor. This is one of the reasons why I follow Serena Yates' Modern Battles series. It is great indeed, that here in the second book, the politics hidden behind the stethoscopes are actually being written about. It was quite a surprise reading of some of the underhanded things going on that I have witnessed myself or related to me by my hubby.

But first, let me get back to Danny and Halldor. These are two men who, on the surface, are incompatible at the very least. Halldor is a closeted, shy man even if he is a neurologist and Danny is an out and proud gay man who has money coming out of his ears. They meet and the sparks fly. Shyly at first, mind you, from both sides, and then slowly, surely, escalates into a sweet romantic love affair that turns out solid at the very end.

Their sweet romance starts within the romance of Grayson and James, the two men in Fighting for Hope (Modern Battles #1). So basically, we come in whilst all that angst is going on between Grayson and his man and in the process, we see how Danny and Halldor first meet. Of course, there is also a bit of background story for these two men in the first chapters of the book. We see Danny as a young man who grits his teeth to emotions after being summarily dismissed by parents. This makes Danny learn not to rely on relationships except with those whom he trusts the most: his grandfather, Sir Malcolm and his best friend, Grayson. As for Halldor, his back story is not that much discussed but we do get the feel of him being a good man with a best friend whom he constantly talks with no matter what or how far the distance. These just shows us readers that these two men, despite their histories, are solid men and not fake.

Their story is set within the politics of creating from scratch the idea of a children's hospital. The expected drama is in the planning and creation of this hospital interspersed with the usual suspects of jealous exes and bosses who want in on the money and prestige. Long story short, the complications of their love affair is not because of their personal shortcomings but from the drama unfolding around them. It all boils down to one thing: money. It turns everyone into anarchists and Danny and Halldor found themselves swept right into the tides of the intrigues. Good thing they both know how to swim!

What I really focused on was the politics going on behind the lab gowns and stethoscopes. Funnily or curiously enough, there was one incident here that mirrored an exact incident experienced by someone I know working in a hospital. So yes, these politics and underhandedness, as well as corruption within the system, does go on and the author was brilliant in her writing about this. None of what was going on was strange or far-out to me so this had a sense of realism not found in other books I had read. At least, on the politics involved in this story.

All in all, I really loved reading this for it is a modern battle within the confines of the medical world. It was quite hard to put down and there were some really sweet moments that made me tear up a little but with a goofy smile on.

Posted by multitaskingmomma at 4:32 AM