Review: From the Ashes (Chronicles of the Shifter Directive #7) by Scarlet Hyacinth 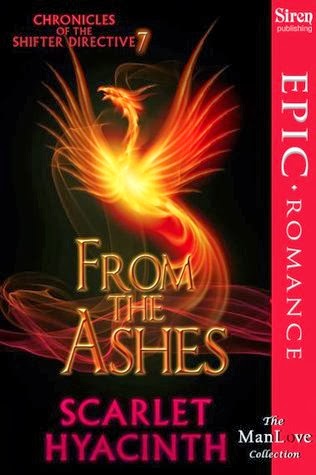 From the Ashes (Chronicles of the Shifter Directive #7)

What is the value of a law long considered obsolete? How does one decision affect the course of the entire history?

Most people never get the chance to find out, but Phoenix and Rachen do. Much to their dismay, they find themselves in a reality torn apart. The draechen emperor, Shtamakarein Tersain, rules the world with an iron fist, but he doesn’t realize his mate is the man he considers his worst foe, Sari. His brother Hareematek hunts the nearly extinct werewolves, not knowing that his other half is among them. The entire world—paranormal and human—is at war.

Phoenix now faces the hardest decision of all—having to choose between the life of his mate and that of countless others. And when his powers disappear, the situation grows even more hopeless.

Will love be enough to fix the broken bonds? Can the world be reborn from the ashes, or will it collapse into ruins of a mutated history?

And so we have reached the seventh and final book of the Chronicles of the Shifter Directive. It is a tale wrought with anger, in a reality torn apart, when the very fabric of time was ripped to pieces by the anguish of a Phoenix unwilling to let go of his mate, Rachen, who had sacrificed his great sacrifice to save the world from the Dark Terror.

For those who read the series, we were left in confusion as to what was going on in Fire's Embrace (Chronicles of the Shifter Directive, #6). We saw Phoenix's magic tearing the very fabric of time and reality in an effort to hold on to his beloved mate. We saw that his magic was astoundingly powerful and were happy Rachen was still with us. But were we going to be happy with the resulting chaos?

At the very beginning of this book, we see the author's note that clued us into what we readers were going to expect. From the Ashes is the alternate reality, thus all the characters we learned to love would be in their alteregos - some remain as those we loved when we read them, most we see a persona we could not love no matter what. This is Scarlet Hyacinth's alternate reality, her 'what if.'

As all things go, we readers are treated with a 'what if' that should be satisfying and better, at least that is our fantasy. Instead, we get a total shift of events and the familiar were there, yet they were unfamiliar. It is difficult and very hard to accept. There are goings ons here that just boggles the mind. It can take a lot out of a fan to accept this book for this was not what we were gearing for at all. This is the world that the phoenix belongs, something so powerful and utterly dangerous. The question readers will ask is: how will reality get back to the reality we love? This  is the tale that the author has mixed up and it is both astounding and desperate all at once.

Well, there was a way out and for those who read the books in order and paid attention, they would have caught on to it. I have read this series over and over backwards and foreward and I still almost missed it - but gladly through my tears - I had an epiphany and a desperate book turned into something wonderful. I found the way out and reading through this, it was confirmed. Thing is, will that way out cause more heartache?

To make a long and convoluted story short and sweet: yes it did. The author promised us tears, she promised us more action, and she promised us an HEA. We do get all these, but at a price. Will that price be the cause of this last book to be my least favorite? Turns out it was not, for there was yet another clue way back in the third book that I kept recalling and I held on to that memory knowing that I would get the proper HEAs I so love. I did get it, in the middle of all my blubbering and sniffling and blowing of the nose. Yeah, I did. Oh so lovely....

From the Ashes marks the last of the Chronicles of the Shifter Directive. It also marks the beginning of a new reality that the characters have learned to appreciate even more. It also marks their firm determination to hold on to their loved ones and be resolute in their task to make their new world a better place where all shifter castes are no longer under the yoke of an anarchous directive.

Personal Note: I have to thank the author for giving us this wonderful fantasy of a tale. This is one chronicle I will never forget and it has a place of honor on my All Time Fantasy Favorites shelf where the rest of my favorite fantasy authors sit. Scarlet Hyacinth raised the bar for MM fantasy genre and it is going to be hard to find another tale as wonderful as this. In all my years reading the fantasy genre (35+ years give and take a few) I have only met six authors of this calibre, she is one of them. It was an adventure reading it.


Posted by multitaskingmomma at 7:02 PM