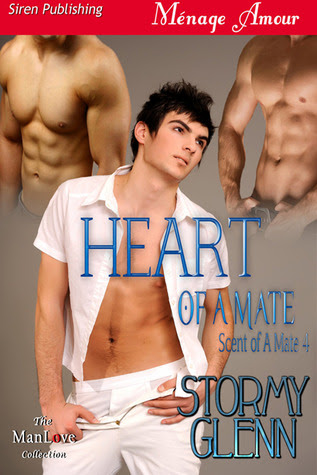 Patch Mason is content to sit back and watch his brother be the new Regal Elder until one of the men coming to see him turns out to be the mate that rejected him and sent men after him to destroy his life. Forgiveness isn’t something he has in him, not any more.

Otto Marshall has been looking for his missing mate for months. He gave the man up once to save him from a fate worse than death only to find out that in giving him up, he nearly destroyed him. Forgiveness is not something he has the right to ask for, but neither is losing Patch a second time.

Sam Holloway was sent to warn the Marshall brothers that their father had escaped prison. He never dreamed that he would discover not one, but two mates, or that both of them would be the targets of an insane alpha bent on revenge. If he can’t get them to come to terms with each other then he might lose them both.

So this is Patch's story and apparently he has two mates, Sam and Otto. Well, we got the idea that it was Otto after reading Heavenly Scent. Now, at first I rated this way better than that book about his twin, Jude for very obvious reasons. Well, for me that is.

First off, the book cover was way better in this case. There was none of the baby angel wings that totally had no bearing on the story while this one shows Patch with his two mates in the background so it does set the theme of a menage perfectly.

Second, this book was better written, in my opinion. Yes, this is a light read, but the issues were well established in the third book that those who first open this already know there were going to be some bit of complications for this relationship(s). Otto is Hugh's brother so I already got the gist first off that the brothers are more likely to get menage partnerships although not all of them will.

Third, there was some bit of action here but there was a sort of lull in a safe room that sort of reminded me of the movie Safe Room. So yeah, that was okay, but I was a tad disappointed that the action and bad-ass bit did not come from Sam nor Otto or even from Patch who is not what he really is supposed to be. It came from a side-character who sort of stole the whole show from the three main characters.

Now, I would have rated this a 4 if not for the fact that the side-character stole the whole show. I mean Kumiko and Trevor took up my imagination and attention more than the three ever did. This was great for the two but it ruined it for the three. Now if these two had a book all to theirselves... I don't know. So yeah, this is the reason why I dropped the rating considerably.

And then there was Sam. What on earth happened to Sam as a character? He started out so well and then he like, got shoved to the background. It's a pity really, this would have been such a great character to develop and yet I see the author just dropped him as a side thingy.

This series has a lot of potential. It's really unfortunate that there is not much attention placed here, and I don't know from whose end. I will continue to follow this story because I am admittedly a curious individual and I absolutely hate not knowing what comes next. So yeah, will continue to read. I just hope things get better written in the succeeding installations.

Crossing fingers here, I do love Stormy Glenn......
Posted by multitaskingmomma at 11:01 PM