Review: A Heart Without Borders by Andrew Grey 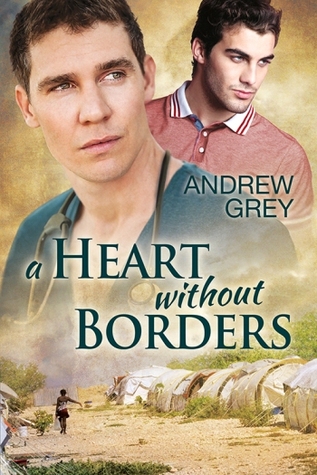 A Heart Without Borders

Pediatrician Wes Gordon will do just about anything to escape his grief. When opportunity knocks, he signs on to work at a hospital in a tent camp in Haiti. One night while returning to his quarters, he comes across a gang of kids attempting to set fire to an underage rentboy and intervenes, taking the injured René under his wing. At the hospital, diplomat Anthony Crowley tells Wes that the kids involved in the attack are from prominent families and trying to hold them responsible will cause a firestorm.

In spite of the official position Anthony must take, Wes’s compassion captures his attention. Anthony pursues him, and they grow closer during the stolen moments between Anthony’s assignments. Escaping earthquake destruction for glimpses of Caribbean paradise. When Wes realizes the only way to save René is to adopt him, Anthony is supportive, but time is running out: Wes must leave the country, and Anthony is called out on a dangerous secret mission. Now Wes must face adopting a boy from Haiti who has no papers without the support of the one person he’s come to rely on most and may never see again.

The first chapter got my goofy smile on and it never left, even at the height of the despair both Wes and René were going through because of the difficulties finding the right documents to get them both out together; at the height of some of the cheesiest morantic lines Anthony gave (especially that love letter!), that goofy smile still refused to go away and by this time my facial muscles were getting strained. All right, even at the height of the sexy, sexy scenes, it never, ever left but by this time my face got hot on top of everything else - yups, I was blushing!

This has got to be the best and worst reaction I ever got to reading any Grey book! It made everyone around me suspicious. I was blushing and giggling like a loon.

This was an incredible story. Set in the midst of a post-earthquake Haitian camp city, Wes was a pediatrician who was escaping the realities of unexpectedly losing a partner. Anthony was a diplomat (or so he says) and he, too, is out there in the middle of all the misery to escape the unexpected death of a lover. Both were trying to live and move on. They meet, they fall in love and do some boom-boom.

Then there was René, a teen saved from the wrath of bullies, who steals the heart of Wes. Soon, it was Wes and René. Anthony either had to take both or none at all. He took all.

This was a beautiful romance between two men and, although it should have been a complication, it is also a story of parental love for a teen who desperately needed help and a live family. What I liked about this story is the lack of angst between Wes and Anthony. Their romance happened. Best of all, Wes stood up for himself, no flipflopping, no anxiety attacks, no wimpiness, none of the formulaic usual. The sense of drama were from the things going on around them. This was such a relief for there are times when stories like these tend to get humdrum in their over-drama formulaic-ness and it could bore.

Wes as a pediatrician already set my mind to at least one star to my rating; the author being Andrew Grey established the second star. The three remaining stars are for a romance that was cheesy and morantic to the nth degree, and a plot that actually worked to develop and become more than the blurb suggested.

It was easy reading this, it just took me longer because I was loony too much. Truth is, I write this after the second read, I just could not get over it. I was not willing to face the fact that I was already reading these words: "It's a dream come true" that marked the end of the story.

Hard to put down? Definitely.

Recommendation? What do you think?