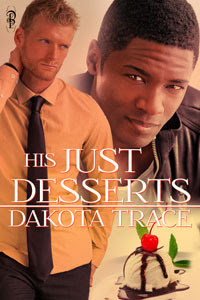 Growing up in a foster home in a small Midwest town, Sean Whitcomb planned from the day he turned sixteen to somehow escape. And he does to the big city of Des Moines at a lawyer’s firm. Now up for a shot at a partnership, he needs to deliver the goods, and it’s not what he thinks. No, it’s a family style meal for the founding partners and their spouses. Which causes Sean a major issue, because not only is he a single gay man, but he can’t cook to save his life, and his boss is expecting a home cooked meal — complete with a family or there will be no partnership offer.

In desperation, Sean turns to the man he left behind in his pursuit of the golden ring, Isaiah Waterston. Not only is Isaiah hot enough to still turn Sean’s crank but he’s also a world class chef at one of the hottest eateries in town. Now all he has to do is convince the man he’d left behind to give him a single night of his time, prepare a mouth-watering meal, and pretend to be his lover for a few hours. Sounds easy right? Well it is until Isaiah attaches his own stipulation –an entire weekend with Sean at his mercy.

I like to watch Martha, Rachel and Jamie (and numerous others) so obviously I love to read some man-on-man stories involving a chef or a great cook for a main character. Isaiah and Sean have a history spanning decades. They had grown up together in the same hick-town where they basically fell in love and had a grand time. Personal dreams and aspirations got in the way and Sean left Isaiah to lick his wounds of abandonment and separation. Fast forward to the present day and Sean finds himself needing the help of his "baby" love and agrees to practically anything Isaiah gets him to agree to.

Hmmm, the romance between the two men was like, rekindled or re-started when they meet or talk once more. This was the point where I got a bit down, things just went too fast for me. Don't get me wrong, their romance was sweet and Isaiah did make him "pay" but there was just a lack of the oomph I was looking for. The angst was present as well, from the devious rival of Sean to the personal drama between the two men and the interferences of some great friends. But the but remains at the back of my mind.

Then there was the mention of a Filipina wife who was a great cook and whose egg rolls were fantastic. The quesiton of one of the men was where this idiot guy rival found such a great woman. The cooking talents of the wife was dropped after this and instead we get Isaiah wrapping up some soup the idiot husband buys instead to replace the ruined one earlier ordered. This part of the story stumped me good. I had questions coming up that had nothing to do with the story but were raised due to curiosity.

You see, I come from the Philippines. There are so many types of egg rolls we serve here and the type usually points to a region. The one with heart of coconut can be from my native island, the fried with bean sprouts from another and the vegies served with sweet and sour sauce can be influenced by a different culture.

Sorry, I love to cook and I love to eat and these questions just kept getting in the way of the story which was great and a huge potential but fell off to the side to give way to some man-on-man action between the sheets and over the table. However, it was still a great light read and I have no regrets reading it. Just wish there was more oomph, know what I'm saying?

Note: I don't have an idea what the label "inter-racial" has anything to do about this story although the book cover does show the difference between the two men. But as it seems to be an official tag for this book, I had to put it here too. I will think about it, maybe I will remove it as I am not one to seriously consider anything "inter-racial." Being a product of so many races myself that I call myself a mongrel, that term is just not me or mine.

*** Removed tag. Not my thing. I am blind to the idea of "race" unless it involves animals which is just plain UGH!***

Posted by multitaskingmomma at 12:36 AM