Review: Point of No Return (Turning Point #1) by N.R. Walker 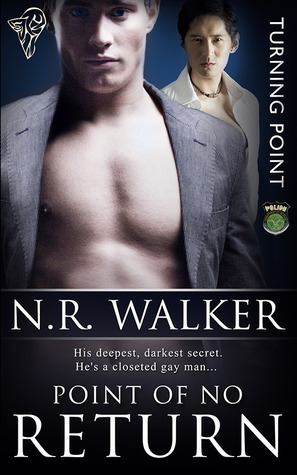 Point of No Return (Turning Point #1)

Matthew Elliot is one of LA’s best detectives—a smart, tough, closeted gay man. When he falls for his gym instructor, it’s not his colleagues he should be worried about finding out…it’s the bad guys.

Matthew Elliot is one of LA’s best detectives. He's been labelled the golden boy of the Fab Four: a team of four detectives who've closed down drug-rings all over the city. He’s smart, tough and exceptionally good at his job.

Enter Kira Takeo Franco, the new boxing coach at the gym. Matthew can't deny his immediate attraction to the man his fellow cops know as Frankie. But in allowing himself to fall in love with a man known to his colleagues, Matthew risks outing them both.

Matt and Kira work to keep their relationship and private lives hidden from Matt’s very public life, fearing it would be detrimental to their careers.

But it's not the other cops who Matthew should be worried about finding out his deepest, darkest secret…it's the bad guys.

I saw this in Madonna196's list of books and I was quite intrigued by the blurb.  I had never read N.R. Walker before so I really had no idea what to expect. I thought maybe some more formulaic story of closeted men who gets outted in an angsty or emotional manner. What I got was something more than what the reviews were saying.

Matthew is one of the four golden boys of his precinct, a Grade A detective who is respected by all those under him, at par with him and above him. They never, for one instant, thought the man they trusted with their lives had a secret, a secret that can be used against him. Kira is the new boxing instructor in the gym Matt and other cops frequent. He is described as an astoundingly beautiful man of Eurasian descent. He is lithe and he is dangerous. He steals Matt's heart and the beginning of a beautiful relationship begins. All in secret. A secret that can be used against them and others around them. A secret that can be used to damage the case being brought up against one of the most dangerous drug cartels in the Los Angeles area.

This may have the cover story of two closeted men having a romantic relationship but in reality, N.R. Walker has written a tough and action-packed detective story that took me by surprise. This was no cheesy-corny detective story. No. This was well thought out, well researched and very, very well written. It was also very VISUAL so it was quite easy to imagine in my mind's eye the fighting sequences as well as feel the intensities of the moments. There was not one instance where I found myself losing focus, especially when the scenes went to the kick boxing fights and that thriller hostage situation.

What really surprised me was the emotional healing at the end, where the four hostages reunited after their rescue and the bonding which had begun during the hostage crisis was solidified by this getting together. I had actually expected the author to take the usual way out, to end the story with an HEA or an HFN or worse, a The End.

I am honestly surprised and disappointed in myself that this is the first time I had read Ms. Walker's work. I had absolutely no idea that she has this kind of descriptive and visual writer, a talent that is not very common. I found myself totally focused on this book and it took some time for me to realize I had reached the very end. I see this is the first book, this means there is more to this intriguing tale and I cannot wait to read it.

Note: My late father once commented that Eurasians are one of the most beautiful peoples on the planet. I agreed totally, seeing them all around me in a country filled to the brim of mestizos (Asian/European mixes) so it was not difficult for me to imagine the beauty of Kira. If I have to tear something apart in this book, it is the cover image depicting Kira: that is not the Eurasian as described in the book. They are more beautiful. Believe it or not.

Posted by multitaskingmomma at 5:09 AM