Review: The Price by Dominique Frost 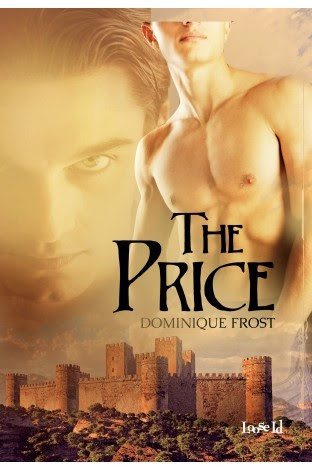 Cale is a serving-boy at a high-class brothel in the city of Havisham. He isn't one of the courtesans, largely because he's too clumsy to manage seducing anyone, but he does his best as a servant, keeping the wine-glasses filled and the guests happy.

Everything changes when the warlord Darren Kaine visits the establishment. Darren is the new ruler of Havisham and is a brusque, commanding man. Fresh from a war that's lasted over six months, Darren is in no mood for frippery, and chooses Cale to accompany him for the night, rather than any of the courtesans on display.

Indeed, Darren so prefers Cale's straightforwardness and simplicity that he decides to make Cale his concubine, and to have Cale visit him at the palace, every night. Stunned by this new turn of events, Cale is further confused by his body's reactions to Darren. Darren is darkly handsome, sexually demanding and absolutely committed to giving his partner pleasure - a fact that has Cale looking forward to his time with Darren, perhaps more than he ought to.

Darren, too, is in danger of forgetting that Cale is just a tool he uses to slake his lust. For a new ruler, every action comes with a price. Will this one be too steep to pay?

I feel lucky this day. Read light reads and this is the second one today which I felt I could not get enough of.

Darren is a rough soldier who is actually not that experienced with relationships. Cale is a serving boy who finds himself suddenly the object of desire of a warrior who just happens to be the ruler of the city. No one thought the ruler should have an untrained paramour but guess what? They are both men who are rough around the edges and know what they want out of life. They both are too similar to each other to not want each other.

This story has the right elements of surprise, romance, erotica, drama and angst we all love to read on a weekend. I am just lucky to have read two in a row and both were such light reads they consumed my time which I totally enjoyed.

If there is one thing I have to complain about this story is that I have no idea if there is going to be a sequel. I think this is a stand alone, which is okay normally, but then, I really, really liked this story and I just want to have more. 74 pages should be more than enough to satisfy me, but I just want more.

That is how much I enjoyed myself.

And thank you! The drama that could bore and irritate or frustrate is totally absent. If there was any, it was too mild to catch my attention. This was just a pure and simple entertaining read.

Posted by multitaskingmomma at 3:54 AM