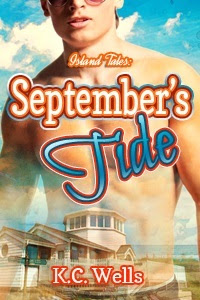 David Hannon hasn’t written a word of his latest detective thriller since he threw out his lover Clark five months ago after he caught Clark cheating on him. So when his agent informs him that he’s about to leave New York to take a little trip to an island off the south coast of England, David is torn. It could be just what he needs—or the vacation from hell. Once he arrives there, David quickly falls in love with the beautiful, tranquil Steephill Cove. The quiet little bay has everything David needs, including the opportunity to get laid regularly, in the gorgeous shape of Taylor Monroe, who runs a water sports equipment hire business. David’s a happy man. He always writes better when there is a plentiful supply of good sex.

When Taylor first meets the Lighthouse’s newest occupant, he can almost hear the click. David is just what Taylor needs—an older, sexy guy who is willing to share his bed, no strings, no promises. At least, that was the plan. As the two men spend more time together, Taylor finds himself growing to like the confident writer more and more. Taylor’s family like him. Taylor’s friends like him. And then there comes the moment when Taylor realizes that maybe it’s no longer a matter of liking David, but something a whole lot stronger.

Unfortunately, his epiphany occurs a little too late, when a visitor to the bay forces Taylor to accept that David might be spoken for. In any case, David is leaving at the end of September—and it looks like he’ll be taking Taylor’s heart with him…

September's Tide, as we all know, is the second book of the Island Tales. However, I noticed that although this story is set in the same Isle of Wight, that is where the similarity begins and ends. There is no mention of the previous characters in any way and it is safe to say that this is a standalone book.

This story begins with a depressed world famous author David, suffering from a lover's betrayal and worse, a writer's block. He had not written anything worthwhile in more than six months and alcohol is not helping. Comes in his worthy publicist/friend/girl friday, Juliet, who sends him off on a forced leave vacation to The Lighthouse on the scenic Steephill Cove. (Here the author reiterates the Googling and I did. I saw David's Lighthouse and his bedroom and took my own virtual tour so I could honestly say that view from his bedroom was absolutely fanfreakingtastic!) Here, he spots a "beautiful boy" coming out from the sea - this is Taylor, twenty-six years old and apparently, twenty some years younger than him.

And that concept ends.

K.C. Wells treated the romance between David and Taylor differently from the usual route. There was hardly any imagined or true angst, so there was no uber-drama to face. Theirs was simply a romance that started off as lust, then friends with benefits and finally blossoming into something unexpected and beautiful.

And it was beautiful, this story.

After reading the first book, I had no idea that I would read up another fantastic book. This is totally different from that first one which topic was sensitive. This has a more relaxed feel to it and yet both the plot and characters developed so very well. I would not consider this a light read either for although it is only a bit over a hundred pages, it still came out seemingly longer and more. In the end, it was so very worthwhile reading this contemporary romance. The best thing is, after I reached the end and went to lalaland, I dreamt of Lighthouses and a beautiful romance that has the potential to be an HEA because the romance developed into maturity and ended very solid.

Posted by multitaskingmomma at 8:18 PM