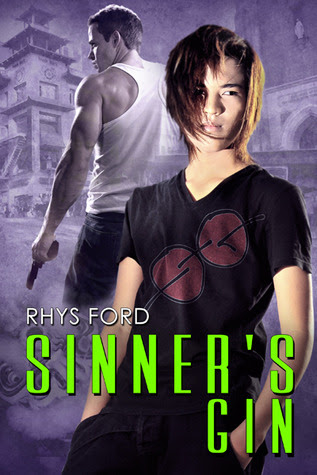 There’s a dead man in Miki St. John’s vintage Pontiac GTO, and he has no idea how it got there.

After Miki survives the tragic accident that killed his best friend and the other members of their band, Sinner’s Gin, all he wants is to hide from the world in the refurbished warehouse he bought before their last tour. But when the man who sexually abused him as a boy is killed and his remains are dumped in Miki’s car, Miki fears Death isn’t done with him yet.

Kane Morgan, the SFPD inspector renting space in the art co-op next door, initially suspects Miki had a hand in the man’s murder, but Kane soon realizes Miki is as much a victim as the man splattered inside the GTO. As the murderer’s body count rises, the attraction between Miki and Kane heats up. Neither man knows if they can make a relationship work, but despite Miki’s emotional damage, Kane is determined to teach him how to love and be loved — provided, of course, Kane can catch the killer before Miki becomes the murderer’s final victim.

I did say I was going to read this after I had read Whiskey and Wry and so I did. This is, as everyone guessed right, is book 1 of the Sinners Series. The arc of the story revolves around Sinner's Gin's, an award winning rock band which members' lives are cut short when, at the peak of their careers, they get into an accident that results in the death of three (two) of the band members. This is the story of Miki, one of the band founders who barely survived the accident. The book opens with Miki, having survived, trapped in a world of his own making which involves a lot of pain and alcohol and a mutty Terrier delightfully called Dude. In comes Kane, an alpha male cop of Irish descent who comes clean into their relationship complete with a wacky family and mother whose wooden spoon should be labeled a dangerous weapon.

As the blurb suggests, a sick individual is dumping bodies and body parts in Miki's garage or doorstep. Those sickeningly killed and chopped up are men who had caused some bit of pain and misery on Miki as a young teen, so basically their death relieve Miki of his pain but poses  nasty questions like: who is next?  or when will it end? The Irish cops with their partners and lots of great Mexican food are what will try to solve this case. In the middle of it all, Kane falls for Miki and Miki falls for Kane. And that is where this story revolves around in.

Comparing the two books, I much loved the second one, Whiskey and Wry for this one reads much too formulaic for my taste but does set the arc of the series and so does a great job. The killer is treated differently here, whereas Whiskey gave the POV thru the killer's mind and eyes, here we see or feel no connection. The killer is a mystery which gets resolved at the end. And that is it.

All in all, I liked this one, but I would consider this a much lighter read compared to Whiskey. It does set the foundation for a great series though. I also see that it too author Rhys Ford almost a year to publish the second book so I get the feeling that she thought long and hard to very much improve on her writing style. It totally worked for Whiskey and so sets my mind to following the rest of this series.

Whiskey and Wry (Sinners #2)
Posted by multitaskingmomma at 5:59 AM