Review: The Tameness of the Wolf Series Books 1 & 2 by Kendall McKenna 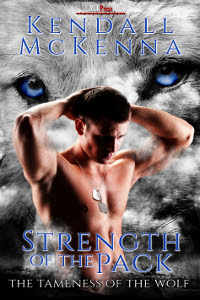 Strength of the Pack (The Tameness of the Wolf #1)
by Kendall McKenna
Published January 18th 2013 by MLR Press
Amazon, All Romance
Formats Available: Epub, Adobe Acrobat, Mobipocket (.prc)
My Rating: 5 of 5 Stars

A Marine werewolf and his commander bring legends to life while surviving combat deployment in Afghanistan.

Lieutenant Lucas Young doesn't know much about shifters. When Sergeant Noah Hammond is assigned to Lucas' platoon, the Marine Corps' True Alpha werewolf challenges the Lieutenant's authority and his self-control. As Lucas learns to dominate and command Noah, he struggles against a strong attraction and deepening emotional bond. During their combat deployment to Afghanistan, Lucas and Noah begin mirroring legendary partnerships. Their bond and their power grow as they survive dangerous combat and ambushes. When one of them is wounded in battle, they both must embrace the strength of their bond before they lose each other forever. 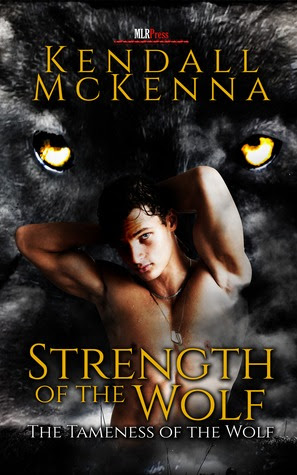 Strength of the Wolf (The Tameness of the Wolf #2)
by Kendall McKenna
Published September 6th 2013 by MLR Press
Amazon, All Romance
Available in: Epub, Mobipocket (.mobi), Adobe Acrobat, Mobipocket (.prc)
My Rating: 5 of 5 Stars

After a fiery exit from Afghanistan, Tim Madison is promoted to major. Jeremy Wagner is a civilian, just beginning his Transition to True Alpha. As a lone wolf, he has no one to teach him the vital principles of strong leadership. After a volatile chance encounter, Tim and Jeremy form an intimate bond.

As Jeremy prepares to someday lead his own pack, Tim struggles with military werewolves being needlessly maimed in combat, as well as specifically targeted by hostile forces. Despite Tim and Jeremy’s feelings, werewolf and human politics or family conflict could prevent their mate-bond.

When I first read Strength of the Pack (The Tameness of the Wolf #1), I got hooked into this alternate world created by Kendall McKenna. Everything that was going on was based on the society we live today and a part of that society. Accepted as part of normal life and no bigotry involved, are the werewolves. Their history is integrated within the human world and it was a well known fact that many of these wolves would mate with humans should and when it happens. It was just a fact of life. This was such an unusual approach to the usual bigotry-laced or fantasy plots involving the creatures so it was easy for me to fall in love with Lucas and Noah and eventually Tim and Jeremy. Since then I have read that first book no less than four times and was obviously happy to see the second book finally making its way into my Kindle.

With Strength of the Wolf (The Tameness of the Wolf #2), we have Lucas' mentor, Tim, who unexpectedly finds himself with his very own werewolf. Problems are: Jeremy is a civilian, he is a transitioning alpha-wolf whose hormones are running on overdrive and out of control, a lone-wolf, and a brat. Tim's officer training and persona as a commanding officer comes into full play here and this is the real reason why their relationship worked. And it took a lot of work for Tim and Noah both as Jeremy needed a firm hand to train him into both human and true-alpha sensibility and responsibility.

This series is a romance obviously, but really it is about the men and women of the armed forces, particularly the Marines, who are at the forefront of this arc. The story of the wolves as soldiers is complicated with the separation of two different types of laws: the laws made by man and the laws of the werewolves or pack laws. Two different worlds collide and its laws with it and there is a need to make sure the two work hand in hand.

Tim is an expert (supposedly, for he knows he is only grasping at straws) of anything werewolf and under his command are none other than the Dominant (Lucas) and his True Alpha werewolf mate (Noah) who also happens to be the top ranking wolf of the whole of the Marines and/or the US Armed Forces. These are two legendary positions in the were world and only happens when there is a need arising. Examples in history of such a pairing are Anthony and Cleopatra and Alexander the Great and Hephaestion. Great warriors, great love stories all. Such is what we expect, see and experience in Lucas and Noah.

So basically, we readers are going to get engulfed in an arc involving inadequate human understanding, superior military officer egos clashing with werewolf heirarchy, a megalomaniac political emperor wanna-be who wants to abuse the weapon that is Lucas and Noah, two wars fought in the far off land of the Middle East involving the Taliban, suicide bombers, and a bratty mate.

The two books are a fantastic read both, especially for those who love to read paranormal man-on-man love/romantic stories involving military action fighting men and werewolves without necessarily getting too para- or too fantasy. This world is 90% our world but with the weres as an integral part of it. Just like the trees and the flowers and the sexy men we all love to oggle on google images. Best thing: Ms McKenna knows what she is writing about. There is no hesitancy to her using military jargon and holds no bars to action scenes best shown when the US marines first booted on the sands of Iraq. These are very visual books so yeah, it does hit just the right spot for my blood-thirstiness. :D

Posted by multitaskingmomma at 3:07 AM