Review: This Is Love by Remmy Duchene, Allison Cassatta 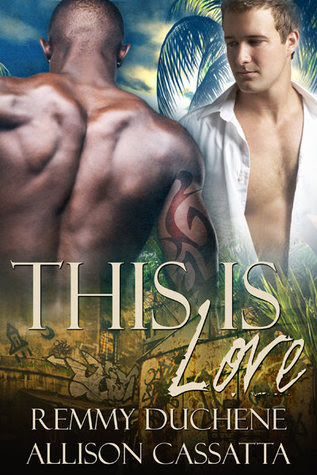 Anderson “Andy” Hartley Jr. lives the life of a playboy with Daddy’s money, but without love. If his father finds out Andy’s gay, the game’s over. So he restricts his sex life to the pool house and seems content until he meets the gorgeous new groundskeeper, who just might turn his life upside-down. Merrick “Maverick” Washington is African-American, an ex-SEAL, and recently released from prison after his false conviction was overturned. Working for a rich white dude who looks down his nose at him is one more blow to his spirit. But any job is a step toward self-sufficiency, and Maverick’s not willing to risk that for a spoiled brat. Then Andy tugs at more than Maverick’s body, and he’s starting to wonder how things would shake out if they both overcame their fears and let their worlds collide.

Nothing could be better than a DSP release about two sexy men falling in love amidst a hopeless situation, get to have their cake, eat it, and live happily ever after. Especially if it is a light read that spares the readers of heavy drama and sends them off on a far away place to romantic-dom.

This is Love is an aptly named romance between two men whose station in life supposedly barres them from meeting or falling in love. One is a Maverick in both name and persona, origins are from the other side of the tracks, a blue collar family, orphaned, a sister to protect, and a stint of jail time under his belt. The other is Andy, a young, devil-may-care man whose father's money allows him to live the life of a maggot and whose station in life allows him to go through life a-wasting.

At least, that is the picture we are made to believe. Deep down, Merrick and Andy are not what they seem. They have their own reasons for having the lives they live now. All things will change when they meet and fall in love.

Alright, so sparks do fly the first time they see each other, but that is as far as the sparks go. Merrick has a mature, although quite despairing outlook on life. He sees Andy as a situation he should not get involved in. Andy sees a treat he should not have and wastes his life away in some more indiscriminate partying before they get a-tangling in the sheets.

There are two parts to this book: when they meet, sparks fly, they circle each other and finally, Andy gets outed and kicked out; and the second part is when the consequences of their actions result to a tragic affair that also signals the turn for the good for both men. They relocate, they fall deeper in love, and they get their happily ever after complete with rings.

Okay, so yeah, this is a mushy, romance that is beyond cheesy. At least we are spared the cheesy words that would have come sorta funny should one or the other man say them. That would have just turned the stomach. What authors Remmy Duchene and Allison Cassatta did was to make this one of the most romantic, light reads I have ever read coming out of Dreamspinner Press, which totally surprised me as this was unexpected and at the same time delighted me no end.

The blurb makes the whole story heavy duty in my opinion when in fact this was so easy to read having done so in just under an hour. It was fast paced, and did very well with a cup of coffee and a slice of cheesecake (no puns! I swear!). For those who think this is too heavy a story, think again. It is an enjoyable romantic read that kind of reminded me of romance novels I used to read way back when. The difference is, we have two really sexy men who get to grow and mature within a short period of time. The result is the same: a goofy smile on my lips and a satisfied romantic heart.

Posted by multitaskingmomma at 3:11 AM