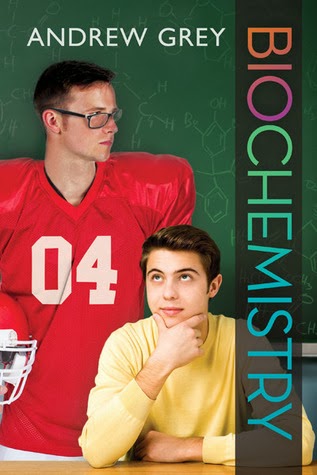 When his college biochemistry class turns out to be much more difficult than star quarterback Freddie Samuelson imagined, his lab partner, Kurt Maxwell, agrees to help. They’re very different: a rich kid athlete and a hardworking openly gay scholarship student. But Kurt slips past Freddie’s defenses, and little by little—despite Freddie ignoring his own sexuality in the past—Freddie realizes he wants to get to know Kurt, especially when Kurt helps him through more challenges than their science class. But it isn’t long before rumors begin to fly, and the obstacles Freddie will face may block him from both the future he planned on and the future he didn’t know he wanted.

I have to say that I totally enjoyed this! Even more than I did the first book of the series, Organic Chemistry (Chemistry #1). That first book blew me away in terms of its romance factor but got a tad disappointed because of its short length. Thankfully, Biochemistry is just the right length and it is just as romantic, more so even.

Before I get to the review proper, let me point out that the cover of this book is perfect for what we expected from this story. Yes, the jock has glasses and yes, the nerd is just as good looking. Those glasses play an important role in Freddie's emotional and intellectual growth.

Freddie is a jock. He looks it, he is physically the epitome of one, and he has long thought that as all jocks go, he is just as dumb. Kurt does not think so and found out why Freddie was not performing well in school. This should have been discovered earlier, but with sports as the main focus, no one really saw much beyond the quarterback skills of this young man. Not his family, not his coaches (including coach Josh) and definitely not his previous teachers.

Kurt's role is significant in so many ways. Not only does he solve the mystery of Freddie's dumb-jockness, but he also guarantees that Freddie will not come out of college as a wash-out jock but a man with a real future. A future outside of sports. Something that no one, not even Freddie, ever thought of.

We get to see Brendon and Josh once more from that first book, but it is really Josh who uses his personal experiences and role as assistant coach who gave Freddie the emotional boost he really needed outside that of Kurt. He was not getting it from his father, his mother was clueless, his brother and sister were out of the loop. His father placing emotional pressure and blackmail did not help matters and just succeeded in confusing Freddie all the more. It is important to mention his friends. One left, the rest said "so what?" and that is what is great about this story. Not too much angst, not too much drama. Just plain old romance between two men.

The story line is a really simple one: dumb jock gets tangled up and in love with a nerd. We see this type of plot popping up all over the place. What is the difference this story makes? I guess it is because it is an Andrew Grey book and what could have been a simple story became much more. This is neither simple nor straightforward. It is not a light read nor a heavy read.

Author Grey's Biochemistry successfully gets the readers entertained, it gets their hearts palpitating in a very good and romantic way, and it keeps us fans dreaming of men who may not all be sexy physically all the time, but always romantic. Oh, so romantic. This is what I call the perfect Goldilocks formula: it is just right!


Posted by multitaskingmomma at 12:44 AM