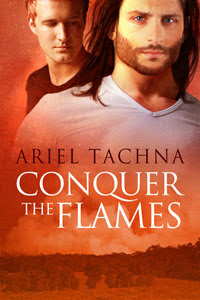 Thorne Lachlan knows a thing or two about getting himself safely out of a blaze. For years he fought in the world’s hot spots, a Commando with the Australian Army. Now, retired, he fights flames for the Royal Fire Service. When a grassfire brings him to Lang Downs, the next sheep station in danger, Thorne meets Ian Duncan and sparks fly that neither man can put out. But both men have ghosts from the past that stand in the way of moving beyond mutual attraction.

While Thorne longs for the home he could share with Ian at Lang Downs, he fears his own instability might make him a danger to others. And Ian’s always believed that the foster care nightmare he escaped before coming to Lang Downs would make any relationship impossible. Trust doesn’t come easily to Thorne or Ian until the fire’s aftermath forces them to see past the scars keeping them both from healing.

Ariel Tachna has managed to get a simple Aussie cowboy story into something like a chronicle of Lang Downs. I have been following this series since it first came out and although I only did manage to review Outlast the Night, I have to say that the more I follow this series, the more interesting it gets. However, of all of the books, I would say that Conquer the Flames is the one with the most sensitive subject matters (yes, two not just one) and this is where the author gave us readers and fans a peek into who she really is.

First, let us talk about the book. Thorne is a warrior, not just a soldier, and just like all warriors, they place themselves out in front of danger and confront it eyeball to eyeball. Once they are taken out of danger, they cannot manage all that well. They have the highest statistics in incidents of PTSD and suicide. Thorne has to face his personal demons in order to survive. One way to do this is to find a safe haven and it just happens to be Ian who just happens to call Lang Downs his home.

Ian is also a survior, he faces his own personal demons and he needs to face his fears to survive. Through the years he did this by ignoring or hiding from them. Then he meets Thorne and he finds safety in the warrior and wants him to stay home with him in the station.

Two injured and broken men who only want to make a life with each other. They need to get over their fears and face them so they can have that life together they crave for so much.

The heavy subject matter was quite a lot to take, the highly sensitive issues the two men faced was even harder. Once the readers gets over these issues, they can then see that this is one beautiful story of two survivors who are fighting against all odds to gain back their humanities and finally get their happily ever after. I found this beautifully written as the author did not sugar coat any of the difficulties these two men and others like them face every single day. At the end of the book, readers will feel a little let down, thinking that maybe this is not an HEA but is rather an HFN. We really do not know for sure. What we are certain of is that these two men are working for their life together and are not afraid to face their fears together. As a couple.

Now it is time to talk about giving the readers a peek into the author's life. For all the heaviness of the subject matter, imagine my surprise when she wrote in Rohan and Sioned from Melanie Rawn's famous book, The Dragon Prince. I had a blast reading this, especially when it was not mentioned once or twice but several times.

By now you readers know I am a huge geek of the fantasy genre - apparently I see the author is too! A personal note to the author: I loved how you wrote in that Ian imagined his love for Thorne as something similar to that of Rohan and his sunrunner witch and the peek into the future that night in the grove. I see some similiarities between the two fantasy characters' love and the love of these two men. The fires creeping into the station of Lang Downs was similar to the renegade sunrunner witch's fire. Even Sioned's scar can be a parallel to the scars that both Ian and Thorne carry. Is it too late to get a dragon into the station? - but then again that would not do at all for it is a Sheep Station and any dragon would simply burst itself from over eating. This is the lighter side of this book and it did work - well, at least for me.


Posted by multitaskingmomma at 9:32 AM