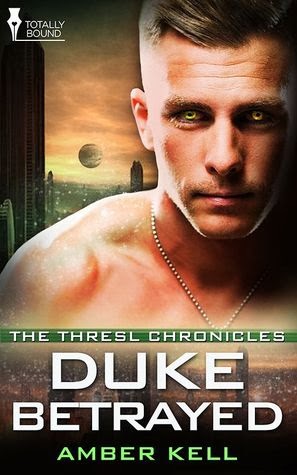 Book Five in the The Thresl Chronicles series.

When Duke Hellbur is accused of treason against his people, he bonds with medic Balaze to keep his human form and prove his innocence.

When Duke Hellbur is accused of smuggling Thresls and selling them off to interested buyers, he undertakes a trip to prove his innocence. In order to retain his humanity, Hellbur bonds with a medic named Balaze…who didn’t exactly give his assent to the binding of their souls.

Balaze admired the duke whenever he visited the castle, but finding someone attractive and wanting to be theirs for eternity aren’t the same thing. After surviving the death of his first Thresl mate, Balaze isn’t exactly eager to go through that pain again. However, the duke doesn’t take no for answer.

Those who are guilty will have to be uncovered if the two men ever plan on finding peace with each other. When Hellbur and Balaze go off on an interplanetary adventure, can they find common ground or will their enemies tear them apart?

I must say! Whooooohoooo! Thank you Amber Kell!


Before you proceed: WARNING! Spoilers Ahead!

Duke Betrayed more than made up for the slump that I felt Thresl was going through. This just boosted my love for the creatures and peoples. The plot is getting thicker, the supposed traitor is caught but is found to be the tip of the plot, and by all that's sexy-holy, Saint is just getting naughtier and naughtier and Mars better be prepared for his life is just about to get complicated - not that it isn't complicated enough.

But let's just get back to Balaze and Hell. Forget about a romance here. Even these two admit theirs is not a great love story. What happens is they meet, and after years and years of stamping down on his animal needs, Hell finally gets to meet a mate who is more than a match. However, I beg to differ. In my opinion, this is a beautiful romantic romance that happened between the men.

These two men may seem world's apart but frankly, they have more things in common. Both had lost their first mates and both had avenged their deaths. Both men were not looking for another but fate has its quirks and they find one another in the most dubious of circumstances. Hell is on a hospital bed after the bomb attack in Bonded Broken (The Thresl Chronicles #4) and who just happens to be his medic? Why, it's Balaze no less. The best of the best and trusted of the king and king-mate.

Once Hell gets off his addiction and gets a whiff of Balaze, he knows this is the mate he had been unconsciously looking for. Of course, his animal instincts take over and no matter how precarious his situation may be, he can't help but bond with the guy. Of course, Balaze has always had an attraction for the Duke. Who can blame him. That is one hot guy! This does not mean he wanted the bonding though after all, he had already lost one mate, now another is here and he may just be the traitor everyone has been looking for.

Both men get off-planet and tried to seek answers. Along the way, Saint meets up with them and waves his massive tail. The ancient Thresl has powers beyong belief and had been tracking his own mate for the past three books so now he has finally caught on. His naughtiness knows no bounds and just like a sneaky kitty, Mars may not know what he's getting into.

This was a really fun book to read. It was fast paced, the plot was finally developing at a faster rate AND the characterizations were written oh so much better this time. This made me happy for the past two books were slumping it for me and I was personally unhappy and anxious the author may not get off. Well, fear not. This is a very entertaining book to read. The Saint affair is also thickening so now I am even more anxious for the next installment. I NEED to know now what this guy is going to get into next.

Well, I know already because of that ending. And what an ending!