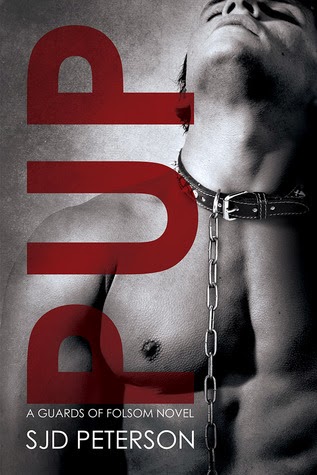 Micah “Pup” Slayde knows he wants Tackett Austin the moment he lays eyes on him in the Guards of Folsom. Micah wants to have purpose, to be taken care of, and to take care of his Dom—wants to trust him completely, live for him, belong to him. To become his everything. Micah is sure Tackett is the one. The problem is, in order to be the perfect sub, he needs to stay focused, and that’s not easy for Micah, who suffers from what he refers to as a “broken brain.” Focus and adult attention deficit disorder rarely coexist.

Ever since Ty Callahan and Blake Henderson’s collaring ceremony, Tackett’s been thinking too much about his own loneliness. Even though Ty introduces Micah and urges Tackett to give him a try, Tackett isn’t so easily convinced. He’s spent his life pursuing a successful business career, and the subs he dominates almost never enjoy the kiss of his leather twice. Twenty years Micah’s senior, Tackett has no interest in taking on and taming such a young and naughty sub—but it’s difficult to resist such an adorable pup when he begs.

It is quite obvious from my rating that this was a good book for me. I have read and seen some and honestly, only a few books stand out for me. Think one hand, five fingers and not all fingers are up.

Pup is about Micah, an ADD sufferer who went through the rigmarole of Ritalin therapy, psychologists, psychiatrists and probably a Developmental Psychologist along the way. His is a condition that could be corrected if the right precautions, actions and boundaries are established. Working with ADD kids in the past, I personally know how the whole thing works and how difficult it can be.

All people see in Micah (or others who suffer his plight) is a hyperactive, scattered-brained idiot who frustrates and maddens everyone around him. And he's a submissive? How can this be? How could this work out? These questions stood up front for me and got me curious to see how SJD Peterson would write this out.

She did so with a bang and more! - at least in the romantic fiction setting that is. So what made me turn and say, this author did it well?


"I want to know I'm the one who makes him that way through my submission and service."

This quote is from a conversation between Micah and Tackett. The DOM was asking what Micah wanted for himself early on in their establishing their relationship. This was the one quote that lit that bulb and told me the author did her research well. For those who missed out on this, do you even realize how difficult it is for an ADD individual to admit this sort of need? An ADD having to submit and serve and get someone happy implies a whole lot of responsibilities from his end. These are two of the most difficult things for any ADD as one of the main problems is to find a FOCUS. And even if they do find it, the ability to stay FOCUSED can cause them to suffer in so many ways. Add in responsibilities? This is like asking for the moon trapped in an iron web locket. Not only is this a challenge for Micah and Tackett, it can cause a whole lot of grief and such should things go awry. Yes, it is possible and probable and highly doable. Difficult, yes, we will agree on that. And No! Definitely he is no idiot.

Then there were the parallels to ADD therapy and the BDSM lifestyle they were both into. The book and most books of this genre always talk about a contract and getting out of bounds could mean some sort of agreed upon "punishment." For those who have an inkling on therapies for ADD, there are many approaches and some of these include agreeing on a contract for acceptable behaviour, agreeing on certain boundaries, and agreeing on paper and signing them. Yes, I know, there are other approaches, point is the author drew some parallels (consciously or unconsciously) but definitely on the right track.

Micah's predicament was astoundingly portrayed and written. Tackett's confession to having difficulties handling Micah and doubting his ability to succeed humanized him - made him less Domish but more Domish (??? eh???). This is a romance set in a certain lifestyle not everyone is comfortable with, but it is still a romantic fiction that can set this heart of mine to pitter patter and my brain to get into high gear and function not as a reader (I confess I over analyzed many things here but refrained from writing them up). In the end, I smiled goofy and that is what is important. Smiling goofy hehehehehe

Posted by multitaskingmomma at 10:09 PM